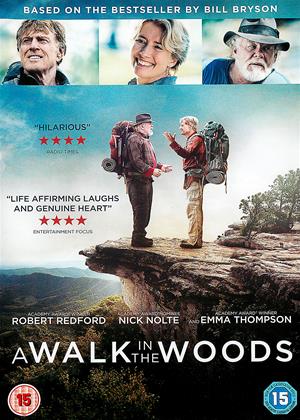 Synopsis:
This hilarious comedy stars Robert Redford as bestselling travel writer Bill Bryson, who makes the improbable decision to hike the 2,200 mile Appalachian Trail from Maine to Georgia. Emma Thompson co-stars as Bryson's wife who, fearing for her husband's life out in the wilderness tries her level best to persuade him to remain in the comforts of the homestead. The peace and tranquillity Bryson hopes to find, is anything but once he sets off with the only person willing to join his trek - his cantankerous friend Katz (Nick Nolte).
Thus begins an adventure like none other as they are forced to contend with everything from wild bears; weird and wacky fellow travellers; irate locals and just having to deaf with each other. Together they learn that some roads may be best left untraveled.
Actors:
Robert Redford, Nick Nolte, Emma Thompson, Mary Steenburgen, Nick Offerman, Kristen Schaal, R. Keith Harris, Randall Newsome, Hayley Lovitt, Linds Edwards, Susan McPhail, Andrew Vogel, Derek Krantz, Gaia Wise, Tucker Meek, Chandler Head, Sandra Ellis Lafferty, John Schmedes, Valentin Almendarez, Danny Vinson
Directors:
Ken Kwapis
Producers:
Chip Diggins, Bill Holderman, Robert Redford
Voiced By:
Blanca Camacho
Writers:
Bill Bryson, Bill Holderman, Michael Arndt
Studio:
E1 Entertainment
Genres:
Action & Adventure, Comedy, Drama

Rent other films like A Walk in the Woods

Reviews (6) of A Walk in the Woods

This film is based on the true story of Bill Bryson - played by Robert Redford - who attempts to walk the Appalachian Trail with his overweight, alcoholic friend played by Nick Nolte. It has some hilarious moments and a few more serious ones thrown in for good measure. The story is simple which in itself is not a problem, not everything has to be full of deep meaning in this life, so despite this I was compelled to watch the entire film and enjoyed it. The performances from these two stars is excellent and I never felt the film lagged at any point. If there is one aspect of the film which I felt may have been a little unrealistic is the ages of the two stars compared to the real life counterparts. When Bill Bryson attempted this very long walk of almost 2200 miles, he was in his fifties. However, maybe I'm wrong and there are plenty of 70 and 80 year old people perfectly able to walk this distance.

Does it live up to the book? - A Walk in the Woods review by BF

It's different, that's for sure. OK what happens in the book gets repeated on film, but somehow the sharp observational joy is missing. I think what made the book so compelling and a best-seller was the author, Bill Bryson's funny, knowledgeable and dispassionate look at contemporary America using the Appalachian Trail as the medium.

Redford and Nolte are good, with some good supporting acting too. The views are stunning - although all the interesting crappy locations have been excised - but the script really doesn't do justice to the book. The reason is that much of the funny stuff comes from the internal commentary of Bryson's mind. It's worth a watch though - if only to persuade you to go read the book!

Pleasant enough - A Walk in the Woods review by MD

I'm not sure why this was made into a movie (it is such a difficult book to convey in another medium) or why Redford takes the main part (he is way too old and never really convincing), but it was a well-made effort that captured some of the essence of Bryson's humour and insight, and actually had a few laugh-out-loud scenes. Of course, the scenery is impressive, and it's an interesting, if narrow, snapshot of Americana, but the 'story' itself just wasn't strong enough to really get me involved and enthusiastic. It is probably the sort of film you'll forget pretty quickly, but it makes for a pleasant enough diversion.

Amiable Escapism - A Walk in the Woods review by Alphaville

You could do worse than while away a couple of hours with Robert Redford and Nick Nolte as they attempt to walk the Appalachian Trail. Nothing dramatic or hilarious happens but the scenery’s nice, the camaraderie is amiable and the witty banter is straight out of Bill Bryson’s book.

The film rattles along pleasurably with infinitely more feel for the American wilderness than the over-rated Wild with its overwrought backstory. In this film, hiking is actually fun! Three stars, even four if you’re in the mood for some undemanding escapism.

Utter Tosh - A Walk in the Woods review by NW

How to take a book from one of the greatest travel author and destroy the essence of his work. Cheap American dross.

Easy to watch - A Walk in the Woods review by BE

Not a lot of substance but cheery viewing played out by two well seasoned actors. I'm not sure this adventure could be undertaken by one man in his late 70s (NH) and the other nearly 80 (RR) but there we go. It is Hollywood! At least the craggy Mr Redford hasn't succumbed to Botox and still maintains a face with character.

A Walk in the Woods review by Mark McPherson - Cinema Paradiso

A Walk in the Woods is a picture entirely reliant on its pairing of Robert Redford and Nick Nolte. Both of them are seasoned actors and both do well in nearly every role they’re given. But what they have to work with in this picture isn’t much. One would think that a stroll through nature would hold some great discoveries in character, especially for two such old guys with a wealth of experiences. This isn’t that movie. Yet again, this is a picture where two aged actors are trotted out for easy comedy.

It starts out promising enough with Robert Redford playing Bill Bryson, a man who decides to hike the Appalachian Trail. This doesn’t please his wife Catherine (Emma Thompson), especially since he doesn’t have much of any motivation to do so. She agrees to let him hike as long as his old buddy Stephen Katz (Nick Nolte) joins him on his journey. The two of them have a great dynamic and I couldn’t wait to hear their banter. I also couldn’t wait for the script that matched their talent which apparently never arrived for this movie.

In place of character development amid survival, A Walk in the Woods plays out in a more sitcom fashion of salty language and slapstick humor. The duo fall into rivers, run across bears, slide down rocks and get stuck in mud. When they’re not trying to kill themselves, they’re laughing about the women they’ve known as ugly broads or easy sluts. When they’re not doing that, they attempt to be serious and emotional that at this point is too cornball to attempt, but the movie still hopelessly tries to find some drama.

Again, the key selling point is Nolte and Redford. They’re the only reason I kept watching this telegraphed comedy continue to go downhill, hoping that they could find something to salvage out of this mess. Thankfully, there are a few moments where, if only briefly, the duo is given some solid scenes of back and forth. I watched these scenes more with my imagination at what could have been a better movie for them. They deserve far better than just another simple road trip movie disguised as an elderly comedy.

Ken Kwapis directs this picture in the same manner he directed his other simple comedies of He’s Just Not That Into You and License to Wed. He tries way too hard to find humor in the woods and then cram in the sentimentality to make up for it. His approach to Nolte and Redford is less “what can they do?” and more “what can we do to them?” I don’t want to compare this movie to the far superior nature walk film Wild, but the flat-on-its-face delivery of nearly every scene had me pining for a movie with more character. This movie doesn’t even belong in the same category as Wild - it exists as though it were from a universe where old people headline comedies usually suited for juvenile actors in their 20’s.

The movie is based on the true events of Bill Bryson that documented his adventure in a book of the same name. During the actual walk, Bryston and Katz were 44. Redford and Nolte are too old for these roles as much as they are for this type of comedy.