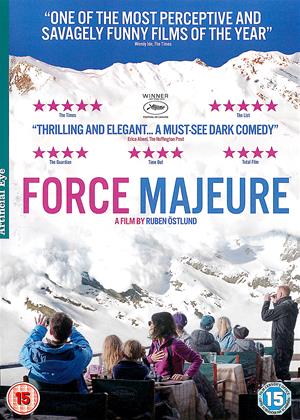 This film is billed as a 'comedy'. Well, you couldn't fooled me. I didn't laugh once - except when I suspect I shouldn't have been laughing! - though I yawned a good deal. I started looking at my watch 20 minutes in, but stayed with it.

Gosh this is a wordy movie. Sounds like something from the theatre of perhaps something that grew out of one of those awful gender workshops they used to have in polytechnic women's studies departments circa 1973.

It's also a very snowy movie - in fact, I don't think I have ever seen a film with as much snow - and it's all set in a ski-ing resort. To be honest, the best parts involve nice cinematographer shots of snowy mountains with (I think) Beethoven (or maybe Wagner) on the soundtrack.

A clunky second act starts with the arrival of friends, and we then move on to endless pontificating about what it means to be a man.

To be honest, I thought the female wife character to self-pitying and unreasonable, I was shouting at her husband to divorce her and get some joy back into his life instead of staying with that over-earnest diva.

I wouldn't wish to have lunch with these people, let alone go ski-ing with them. In the end I was hoping for a huge avalanche to shut these self-pitying people up. But no such luck.

A very unrealistic ending rounds off this clunky psychoanalytic movie which will no doubt appeal to some more than others. A VERY irritating and odd film.

A family on a skiing holiday in the alps, while sitting on an outdoor terrace, witness an avalanche that threatens to sweep them away. At this point of danger and crisis, while the mother tends to the children, the father runs away and, when everyone survives, has to live with the consequences .

It's a great set-up to an overlong, tedious film that talks, talks and talks some more, ambling along, taking some strange digressions (what looks like the father's fantasy of being involved in a male-only, naked rave) that might well have something to do with the issues of masculinity, family duty and responsibility. It's hard to say. There's a lot of talking, but not much gets said. As with a lot of European films these days, this wanders on its way for nearly two hours before finally ending with the idea that the mother, who has held her husband to account, is no better and is happy to desert her children. As a reward, the husband starts smoking in a most manly way. No, I've no idea. A great set-up squandered by a lot of moaning, crying and self-pity, but nothing that cuts to the heart of the issue.

This is, as is noted by the other reviewer, billed as a "Comedy" or even "Dark Comedy". I've seen funnier cold sores.

Is this Sweden's idea of humour? - Force Majeure review by PR

As has clearly been stated by all other reviewers , this most certainly isn't a comedy. But then it isn't good enough to make it as a drama either. At best it might be interesting as an anthropological curiosity - that is, assuming it accurately portrays Swedish attitudes. But for their sake, I hope it doesn't…

Really wish I'd read the reviews above and not the nonsense printed in the press about this film before I rented it! I agree with everything above. Comedy? Don't make me laugh. Two hours of my life I'll never get back.

A husband abandons his wife and two children during an avalanche scare on a skiing holiday in the Alps. The film explores the emotional fallout. It’s something of a tour de force, with improvised dialogue and static shots that are held to the point of tedium. Still, the characters’ arcs hold the attention for the most part and there are some beautifully filmed snow scenes. Although overrated by arthouse critics, it’s worth a watch if you’re in a mellow mood.

Weird & strangely upsetting as couple try to adjust themselves after a near disaster avalanche. Very slow, quite boring. The character who played the visiting friend looked like a Nordic God!!

A lot of snowy nothing - Force Majeure review by TR

I didn't realise from the over-hyped blurb (as always, the blurb-writing industry is a very lucrative one, is it not? sending mugs like me in the direction of artsy rubbish like this), that the avalanche happened near the beginning and, far from bidding a fond farewell to these self-absorbed and irritating types, we'd have to suffer them for the next two hours!

I rented this with the stupid (no, I mean it - I'd miss-read the blurb) idea that it was an intelligent disaster movie. It rapidly became clear I'd got that wrong. But I hunkered down for an intelligent something-else..

Oh dear. So, Smug Family Robinson are having lunch al fresco at Ski Resort Smugg, and a controlled avalanche goes wrong. Instead of rushing to sacrifice himself for his sullen wife and spoilt brats (for such they are...), dad leaps the other way. Seems like a sound move to me.

But for the rest of the fim, the Sullen Wife and Spoilt Brats set out to punish him, to the point where he's set to follow their toy drone out the window.

Trouble is, talky films about Relationships Fracturing only work if the characters are likeable or interesting. And these just aren't. Well before the end, I was shouting "Oh just shut up, split up and let's have a yeti!"

As for it being a "comedy" - nope. Didn't even raise a rueful smile.

Skiing was always one of my favorite sports as a kid, perhaps because I enjoyed the independence of zooming down a snowy hill. It was the perfect getaway from parents to clear your head and think for yourself. But for the family of four in Force Majeure, isolation is the last thing that they need. It breeds a sense of doubt and uneasiness for a family that appears on the brink of a divorce. Their ski vacation at a massive mountain retreat is anything but when forced to approach their own instincts. The photo they pose for in the opening scene, smiles and all, is merely the exterior of something more fearful.

The spark that brings about a wave of questioning results from a morning breakfast on the patio of the resort. A series of controlled avalanches hits too close and assaults the poor family with a wave of falling powder. As the frightening wave consumes the patio, we hear the brother and sister call out to their father Tomas. Like those around him, Tomas panics and scurries to safety without his family. After a minute or two of white haze, the guests shuffle back to their tables to resume their meals after a frightening ordeal. The mother, Ebba, is naturally angered that her husband would leave them behind. But she bottles that anger up temporarily as Tomas just shrugs off the event as if he did nothing wrong. The brother and sister are just annoyed and disturbed by their parents making more mistakes.

Ebba instead decides to unload her frustration during dinner with another couple. When relaying the events of the avalanche, Ebba harps on how cowardly Tomas behaved during this situation, favoring his phone over his son. But Tomas still believes he didn’t do what Ebba attests, arriving at the conclusion that they both have a Rashomon style reasoning of the account. They both try to let the issue go with a hug, but that feeling simply cannot be shaken. The two of them have some difficult aspects of their marriage and themselves to deal with, but a ski vacation with the family does not make the best environment for rekindling (at least at first).

Director Ruben Östlund doesn’t side with either the man or the woman, pulling the viewer back to witness the scuffles of marriage from a distance. It stages a traumatic what-if and let’s the emotions flow with the audience awkwardly distancing themselves. Most of the time we see the couples talking in the hotel hallway is from another level, sharing the same view as the voyeuristic janitor. Other times in the scene we’re placed right in the middle of the trainwreck. Tomas has a massive breakdown in front of Ebba and we see the closeup from her perspective. The camera is mostly where we want it to be for these scenes; close enough for the informative bits, yet distant enough for when things get too personal.

The entire film is gorgeously shot from the Swedish mountain resort. Östlund let’s us take in all its silent beauty, broken up by small burst of distant explosions for controlling avalanches. We can feel the isolation and desolation from an endless land of white. Characters often become lost in all the snow be it from long-shots at a distance or the windy kick of powder creating a fog. Little moments of the trip are given some time to breathe in the ambiance. The ski rides up the hill, via rope towing the children or the escalating chairs for the adults, are all kept quiet with the characters given much time to dwell on their own thoughts. The kids bring along a drone toy that they fly outside the window during the evening hours. The first night features the entire family sleeping in the same bed, a scenario every parent is familiar with.

Force Majeure is a film that’s hard to pin down in its exact tone, but it delivers on the stylish examination of human instinct with flying colors. It holds on its subject and never lets go. Tomas’ old pal tries to defend his friend when presented with the facts, but that only leads to another argument in which Tomas’ friend bickers with his young girlfriend back at their hotel room. Such scenes give the impression that, no matter how secure we may feel around others, there’s always a coat we wear for shielding something inside we hate. Östlund doesn’t want to strip his characters down to this level of base beasts, but he wants us to acknowledge this personality and come to terms with the masks we wear. Through that offbeat examination, a family learns to become better people, no matter how awful they believe they appear. One can only hope such a film does more good for a couple than those silly what-if couples games that often breed similar fights of awkwardness.