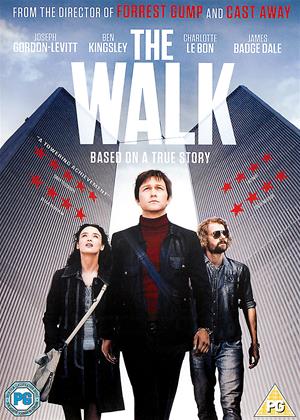 I read some poor reviews of this movies giving it 2 stars, but I found it hugely enjoyable. It really is nail-biting, especially is you don't like heights! My heart was racing at times, and my stomach quesy as camera panned down to the drop!

There was also a documentary Man on a Wire a while ago, and that's good too. But to be honest, I preferred this.

OK, we know that the guy DOESN'T fall from his high wire stretched between the World Trade Centre towers in 1974 BUT the writers stuff the script so full of jeopardy that it really doesn't matter (I only wondered at times how true all of the obstacles that appeared in the main character's way were really true!)

The only thing that grated a bit was the rather twee view of France occasionally; but then, Hollywood films give an equally twee view of London and the UK! Hence the 4 not 5 stars.

The characters and script were all good, as was Ben Kingsley as the strict circus teacher.

I would have liked to see the REAL M. Petit at the end perhaps, so we know how his life went after this.

But these are minor quibbles. This is a clear 4 stars and a great movie for the whole family to watch with their hands over their eyes!

Odd but entertaining - The Walk review by PC

An enjoyable film based on a true story, the effects are great although I imagine they are slightly diminished on the small screen. My only problem is the slight fakeness of it all, from Joseph Gordon-Levitt strange face to the rather picture card depictions of the major cities.

How do you make a film about a man who walked across a wire between the World Trade Center towers? It’s interesting enough to warrant a stirring documentary (Man on Wire), but a feature-length picture needs a drive and a presentation. To let us into the world of the walker, Philippe Petit, the movie let’s the character do what he does best: perform. Played by Joseph Gordon Levitt, Petit narrates his story with an exuberance and passion. He’s overjoyed to have walked across one of the highest ropes in the world and can’t wait to tell us all about it.

Philippe is an eccentric French artist of the 1970’s who possessed many performing talents, but was most obsessed with tightrope walking. Constantly buzzing around the streets of Paris, he just can’t seem to find the perfect spot to place his rope. When he spots the construction of the World Trade Center towers in a magazine, he knew exactly what he wanted do as a grand artistic feat. While he waits for the towers to be completed, he spends all his time training at a circus. He gathers together a band of inspiration that includes sagely circus owner Papa Rudy (Ben Kingsley), the passionate artist Annie Allix (Charlotte Le Bon) and the anarchistic photographer Jean-Louis. His skills improve to the point where he takes his walking for a test drive by balancing across the Notre Dam Cathedral. It’s a sight that predictably draws applause from bystanders and anger from the police.

Once the New York twin towers are completed, the tone becomes more solidified as Petit’s stunt turns into a heist. Given that his act will be illegal, he calls in all his friends and makes new ones to pull off what he describes as an artistic coup. Every aspect of pulling off this walk is meticulously outlined and detailed by Petit - from actually getting up to the tower roof to drawing the rope across the two towers. And when things start to go wrong, Philippe and his crew will have to improvise as best as they can when faced with pressures of security and gravity.

Reportedly, the walk itself was so convincing in its height and depth that audiences were apparently vomiting from the sense of vertigo brought about. It’s probably one of the most blown up tactics of movie marketing, but one that’s usually reserved for horror pictures. I recall one strange Target employee recommending me Paranormal Activity upon its release in that people he knew barfed in the theater. While I didn’t notice any puking at the IMAX 3D screening I attended, I can attest those with a strong sense of vertigo will find themselves looking away from the screen.

Thanks to director Robert Zemeckis and his ImageMovers studio, the walk is a beautifully realistic sight that drinks in nearly every angle of the World Trade Center towers. Philippe informs the audience that the one thing a tightrope walker should never do is look down. But how could you not with such a large view to witness. Even Phillipe himself - caught up in the transcendent nature of his coup - takes a moment to gaze down on New York as well.

Aside from Zemeckis’ sensational special effects, which he flawlessly delivers on with all his films, he also keeps the picture moving with energy and passion. Despite the long build up to the real draw of the picture, Philippe’s ascension towards being the most famous of all tightrope walkers is neatly and tightly strung along. The enthusiasm of Philippe emits off the screen with every scene as he attempts to persuade his cohorts to be just as jazzed about this event. He also has a quirky bunch of people to work with including a classic stoner, a paranoid revolutionary and a French math teacher who is deftly afraid of heights. They’re all so ragtag that you really do hope they pull off this stunt.

The Walk is a real crowd-pleaser for both its amazing special effects and likable characters. Throughout the picture is the familiar Zemeckis charm - the sense that you are watching something magical take place on the screen. For this real event that shaped the city of New York, he lets us take in the splendor from all possible angles and enjoy the same sense of satisfaction that Philipe feels above the metropolis. It’s a thrilling, wondrous and even comical journey that is just a joy to watch from beginning to end.