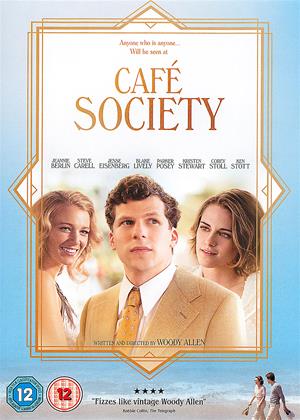 It looks good, it sounds good but there is really little more in this rather vacuous movie. It has all the Hollywood clichés; the powerful man on the phone, simpering women, I can't leave my wife, dump the body in concrete, how to succeed without really trying etc. Maybe Woody Allen who is known to dislike the Hollywood system was using cliché as ironic satire.

If you're directing a film and you are now to old to play the lead why not get your leading man to mimic every Woody Allen mannerism, both physical and vocal. Jesse Eisenberg does this really well.

The frocks and the cars are great.

This is another of Allen’s 30s pastiche movies, an instantly forgettable tale of Jesse Eisenberg (as diffident as ever) trying to woo Kristen Stewart in the social whirl of Hollywood and New York. It looks good and Stewart is luminous, but we’ve seen it all before in better films.

It’s as though Allen’s run out of ideas. The poorly-structured plot meanders and goes nowhere, while the bland soft jazz score is as predictable as ever. Even the voiceover Allen contributes is tired and superfluous. He needs to watch Jules et Jim again to see how it should be done. Although it’s painful to say, he needs a co-writer.

Alphaville said exactly what I wanted to say but, because I love Woody Allen, I put one more star. Still it is far from being his best film even if worth seeing.

In my view even a substandard Woody Allen film is still watchable but this is much better. Not creme de la creme WA but delightfully crafted and shot with some excellent performances. Gentle, amusing and wistful - I'd rate it 3.5 stars and for WA fans definitely worth a watch.

Worth a watch - Café Society review by DW

Worth a watch, possibly, if you have fond memories of Woody's back catalogue and, in spite of more recent disappointments, still hope for something better. Midnight in Paris comes to mind as an exception to his more recent output, witty, imaginative and above all, clever.

Cafe Society doesn't match up to Midnight's standards but provides a very pleasant watch offering gentle humour, some nice performances and a real period feel not least due to some well-chosen music. Does any other director choose such brilliant soundtracks?

A mildly amusing film. While you can expect 1930s music in a Woody Allan film, there was too much of it. The ending was a surprise though. One expected a happy ending. Instead there was an ambivalent one.

Affectionate nostalgia for 1930s Manhattan nightlife and golden age Hollywood led by  Jesse Eisenberg (Bobby) as a naive major studio gofer promoted by his big shot uncle (Steve Carell).  Bobby falls in love with secretary Kristen Stewart who happens to be Carrell's other woman. Burned, the young man relocates to New York and opens a nightclub, ignorant that the enterprise is facilitated by the strongarm manoeuvres of his gangster older brother.

This is Woody's first film shot on digital cameras, at no detriment to the usual splendid look of his productions (by Vittorio Storaro). His work goes on being exceptionally beautiful.

It is a bittersweet comedy which evokes a sense of how we may live contentedly in the present, but our lives are always haunted by the the ghosts of past affairs, and once possible loves that never were.

Its recreation of east and west coasts between the wars is exceptional, and it's a joy to imagine ourselves there, eavesdropping on conversations about Paul Muni and Hedy Lamarr and standing outside Spencer Tracy's mansion. Woody narrates, and he sounds very, very frail, suggesting maybe we won't see him in front of the camera again. It's a superficial film and not too many of the jokes land successfully, but there's still plenty of magic.

Woody Allen’s latest work quotes heavily from his earlier projects, thus following a well-established formula which succeeds in most areas, but nevertheless fails in others. It’s nostalgic, mimicking the likes of Midnight in Paris while simultaneously spreading an aura of ‘newness’ that wraps the actors in a cocoon of 'allen-isms' which never quite reach their full potential. At the end, Café Society is neither Allen’s best, nor worst feature till date, but it’s certainly up there with his most memorable films that treat nostalgia like a fuel from which human emotion transmutes in a yearn for better, simpler times.

Café Society starts off by intertwining key Woody Allen ideas like fate, second chance and love into a concoction of events that unravel as fast as the human eye can see. Typical cast for such fast-moving plot would be Jesse Eisenberg, and he certainly doesn’t disappoint. In Café Society, he gets paired with former co-star Kristen Stewart and the two embark on a mysterious journey which should allow them emotional maturity when everything is said and done. Whether or not this is executed seamlessly, remains a question to be answered for another time, with one thing being certain: Jesse feels, walks and talks like your typical Allen antihero, and when a transition between said narration happens – it flows as naturally as every director would want.

Fortunately for us, the audience, the parts Woody Allen ‘lifts’ from himself come to be the better ones. Add the beautiful cinematography by industry master V. Storaro (Apocalypse Now, The Last Emperor, Muhammad: The Messenger of God) with his candid style that employs silhouettes and close ups in an innovative manner, and one will finally witness the true power of raw cinema in its purest form.

To aid Bobby (Eisenberg) in his trials and tribulations comes Steve Carell in the form of the eccentric Phil Stern, who more often than not plays like antithesis of the director’s typical hero, in a role that sees Carell taking a more serious approach than what he usually does.

Without spoiling anything, it should be said that the connections Woody Allen brings up between characters are impeccable, and rivaled only by few giants of modern American cinema (Scorsese, Soderbergh). This is true probably because Allen pens his movies by himself – therefore knowing his weaker spots and avoiding them at all costs. And Café Society has many, although truth be told: they don’t distract much from an overall enjoyable period experience per se.

Ultimately, Café Society is well-worth a look or two, if only to see how mature Allen has grown during the past years of his turbulent Hollywood life, in a film that plays much as a reflection upon one’s own choices in life.