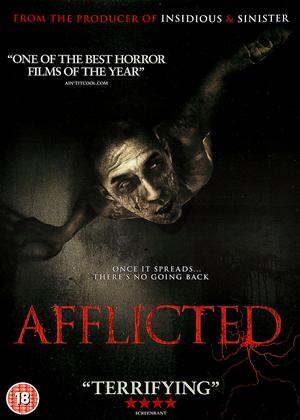 Some films are better watched when you know nothing about them. This is one. Please be aware that reading the following will lessen the impact of much of what ‘Afflicted’ offers.

This is an expertly crafted found footage film directed, written by and starring Derek Lee and Clif Prowse, playing themselves, recording a round-the-world trip instigated by the news that Derek is suffering from a cerebral arteriovenous malformation (AVM), which could kill him at any moment. Whilst meeting friends in Paris, Derek takes home a girl called Audrey. Leaving them alone in the apartment for the night, the friends eventually find him unconscious, alone and bloodied after an unspecific attack.

If watching a cheery young man descend into a ravenous, blood sucking vampire with incredible strength and agility can be described as fun, then this is probably it. Clif stays with him, and despite attempting to get Derek to hospital, it seems events conspire against them. The camaraderie between the two is touching and very realistically played; these are silly, life-loving young men who have been afflicted by something they cannot understand.

When Clif is eventually killed and bitten by Derek, the story begins to meander a little. The restrained CGI effects take hold - we’re all familiar with the familiar horror pattern of tragic monster pursued by authorities, but this is a rare occasion where we see such a hunt presented by the victim’s own point of view. When Derek finally locates Audrey do things become interesting once more: Derek is incurable. At least he won’t die from AVM – he won’t die at all; this strain of vampirism seems to provide immortality, so Derek continues to feed on criminals and low-lives. If he doesn’t, the curse will completely overtake him.

As the credits roll in, they are interspersed with blurred killings, the last one of which seems to be carried out by an also-vampirised Clif.

I found this film quite strange and annoyingly on hand held camera again footage. It was ok to watch the once but I probably wouldn't watch it again. Bit of a silly story of someone slowly turning into a vampire

With the found-footage horror films now easily ranking in the 1000’s there are only a handful of such films that have really worked since the original Blair Witch Project was released a good twenty years ago; Afflicted is one of the first films in recent years that really manages to create horror, character, narrative and believability to the same level of success.

Diagnosed with a brain aneurism that could burst at any moment Derek Lee and his best friend Clif Prowse decide to take a trip around the world, so that, should Derek drop dead, he’s at least experienced some of the greatest things life has to offer. Skydiving in Spain and nightclubbing in France culminate in a one night stand between Derek and the beautiful Audrey, however, when his friends decide to pull a prank on Derek by interrupting him and Audrey they burst into their friend’s hotel room to find him alone on the bed covered in strange wounds and bleeding.

Over the next few days Derek begins to show signs of undergoing physical changes, changes that cannot be attributed to his brain aneurism, such as super strength and a sudden bloodlust, violent attacks and a desire to feast on his victims alert the boys to Derek’s transformation into a vampire. What follows is a bloody, violent and brilliantly executed horror-drama in which Derek is chased around Europe in search of Audrey and answers.

There are a number of things that make most found-footage pictures terrible, however most of them generally boil down to a lack of pre-production; whether it’s poor planning, scripting, lack of characterization or an over reliance on clichés time and time again found-footage films have a tendency to blur together, a seemingly never ending list of alien abductions, supernatural happenings and supposedly true ghost hunts. What makes Afflicted better than almost any found-footage feature I’ve seen in the last few years is the care taken by the film makers, this isn’t just some money-making idea for stars and writers Clif and Derek, and this is a personal project, created out of a love of the genre and a dedicated passion for film making. A well thought out script and clearly planned and considered plot, not to mention the well-executed camera work, come together to give Afflicted the strong narrative and attention to detail most films of this nature lack.

What also helps to make this film better than most - not just found-footage - horror films at large comes from something that no amount of time, dedication or perseverance could recreate however; the genuine friendship that exists between Clif and Derek translates perfectly into their on screen relationship and their partnership gives the audience something to latch on to and care about without, I suspect, even realizing they were doing so.