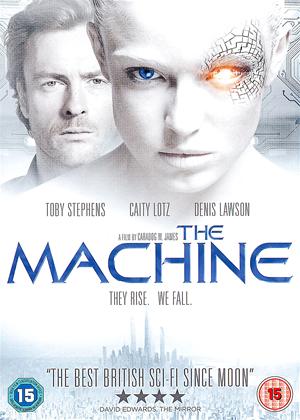 Reviews of The Machine

I find that most of the time when I watch experimental films like The Machine, ones that use horror elements to add flavour to an out there story that I find the ideas get in the way of the story. However director Caradog W James uses his own script to create a fully original and visually stunning view of the world through the eyes of a different kind of life, one who desires to experience everything a human does without the delight of reveling in it.

The Machine follows Vincent (Toby Stephens), a scientist looking to create the first artificial intelligence. When Ava (Caity Lotz) brings a new system to his work the two begin to bond and understand each other until a tragic event leaves Vincent alone with his work. When he finally succeeds in building his creation he finds his connection to her compounded by the fact he has used Ava as the basis for her design forcing him to look at his creation in a different light, one that might change the world entirely.

Not only is The Machine an interesting look into the world we live in it also presents the downsides to our desire for faster, better machines. While Caradog's script has a few clunky moments of forced contemplation on the whole this is brilliant sci-fi by a fresh new voice. Lotz and Stephens are excellent as the naïve Ava and the world weary Vincent. Lotz manages to make her characters completely unlike each other while also creating a sense of them possessing the same ideals. While Ava may be malleable, The Machine is tough and virtually indestructible while still possessing the ability to empathize with the humans that are beneath her.

The film takes advantage of its low budget to get creative with the shots it employs. It presents the world through The Machine's eyes as she takes in every little detail. The dynamic shots make it easy to see the world from a slightly different aspect putting the viewer in the mind of this advanced creation so that by the end you can decide for yourself if she is human or not, something that you may think seems obvious. The film forces you to see things differently, not just the technology we all have come to love but of the way we see people overall and that is an impressive feat.