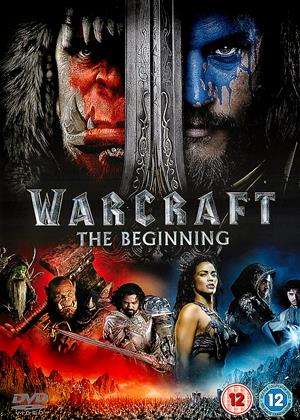 Reviews (5) of Warcraft: The Beginning

I've never seen any of the Warcraft games this is based upon, so didn't really know what to expect, but hired this on the trailer and was very surprised to see that the film is a lot better than I was expecting! This is really Conan and Krull re-invented for now, with a little bit of Shrek and Lord of the Rings thrown in for good measure. Whilst the script and storyline are fairly basic and quite predictable in parts and the film has obviously been made on a budget, I personally feel the makers have done very well to bring us an action packed and highly entertaining movie which doesn't take itself too seriously! Some critics may have panned this, but I see this sitting very comfortably alongside other childrens favourites at Christmas and on a Sunday afternoon, good family viewing throughout!

Nothing that special really - Warcraft: The Beginning review by gazmb

I've never played the games so can't compare or judge that. It's an ok film for a task type film, but for me it was like a Lords of the rings/conan/Krull and shred mashed into one film. Like a previous reviewers has said . I enjoyed it for just a adventure fantasy film.

Only the beginning? Help! - Warcraft: The Beginning review by Alphaville

One of the ironies of modern cinema is how boring the technical wizardry of motion capture and CGI become when there is no characterisation or plot on which to hang them. Here, for example, we have giant orcs beautifully realised but less interesting than the cartoon penguins with which Dick Van Dyke dances in Mary Poppins.

The film is based on a game so expectations are immediately low. As well as orcs there is, for instance, a Star Wars-type Force called the Fel and a Merlin-type character called the Guardian (queue lots of swirly blue lines to indicate magic). The dialogue is comic-book functional and the minimal plot is irrelevant (orcs fight humans).

Still, for people who like this sort of thing (fans of similar nonsense such as Lord of the Rings and Game of Thrones), this is the sort of thing they’ll like. For the rest of us, one star for the special effects and for watching Dominic Cooper slumming it as the King of Azeroth.

I thought Travis Fimmel was so good in Vikings that he might bring this alive. Nope. His acting is exactly the same, I have never seen an actor with less range. The problem is that the amount of technology brought to this film must have taken months or at least cost a lot but merely looks like lord of the rings with a much less interesting plot and certainly much less interest.

There are plenty of better ways to spend your time than watch this film. - Warcraft: The Beginning review by Schrödinger's Cake

In the same way that being able to write and being an author are different things, having access to talented artists and state-of-the-art CGI doesn’t make you a producer/director. This is sadly yet another project that ends up feeling like a cut-scene from a console game that has been spun out into a 2hr film.

What story there is, is hackneyed and thin. And the cast alternate between drama-club overacting and barely being present on screen.

There are plenty of better ways to spend your time than watch this film.

Warcraft: The Beginning (aka World of Warcraft) review by Mark McPherson - Cinema Paradiso

If you’re a big fan of Warcraft, Hollywood has made your movie. Not for anyone else, but specifically just for you gamers. Writer/director Duncan Jones understands your love for the game and he’s willing to geek out with the fans for this movie. He’s spent plenty of time crafting a world of Orcs, wizards, knights and magic that stays true to the video game. I dare say, in terms of pleasing the fans, Warcraft may be the first movie based on a video game to satiate the fans.

Everyone else, however, will not see the movie with such glee. They’ll be treated to a cold, confusing and incoherent story. It perfectly embodies that sense of being invited to a party where the partygoers break out the Dungeons & Dragons when you have no idea how to play. Nobody will talk to you or let you in on the rules of the game as they immediately break into a geek-gasm of fantasy creatures and magical powers. It’s a sight that makes the uninitiated feel left out of the party. And it’s never a good sign when the first of a franchise begins and you feel as though you’ve missed a movie before this one.

But even if I did do my homework and was able to catch all the Warcraft lore flung at the screen, I still wouldn’t be that impressed by this clumsy oaf of a blockbuster. The movie trips over itself constantly in a rush to skirt past these overly cliche and wooden characters to get to the action. We have two sides represented in the war of humans versus orcs. The orcs need a new land to help their people thrive. The humans won’t let them invade. There are good orcs like the chief Durotan who wants a brighter future for his son and bad orcs such as the powerful cleric Guldan that rules over the orcs with a magical fist. There are good human such as the brave knight Lothar and a mysteriously evil wizard Midhiv.

The frantic pace of chugging the plot through two hours leaves no room to explore these characters or even grow to like them. Everything is so rushed with exposition that all of the drama comes off as melodrama. Lothar has a son that he’s worried about being on the battlefield - a son we see for all of two scenes before he’s used as pathos. You’d think that Lothar’s concern for his child would collide with the similar motivations of Durotan, but that would actually be intelligent. Hardly any of these plot threads connect, many of which miss each other by just one scene.

The movie is in such a rush to get to all these battle scenes of orcs versus humans that it forgets to make us care about any of this. We spend all of 30 seconds in the intricately designed Ironforge of hard-working dwarves before being whisked away to more exposition. A good two minutes is spent at a tavern where more characters are quickly introduced and more exposition is explained. Another scene of exposition follows. Then another one. Then, finally, there’s a battle scene of orcs versus humans that is rather engaging. But then we’re back to another handful of scenes with exposition. If you missed that first battle, don’t worry; you’ll get another one soon. And then another one. And by the time you reach the climax of massive war and a cheapily built effect of a golem, you’ll grow tired of them.

As if to compensate for the ridiculousness and complexity, Warcraft’s story becomes bitterly dark. Heroes die left and right when they’re not appearing dead-eyed and mopey, ultimately leading to a stalemate. Keep in mind this is intended as the first of a movie franchise. But is this really how an epic fantasy series should begin? With dread and darkness that ends with a whimper and a heaping of pathos? It’s not exactly a tone that makes me eager for the next picture. Warcraft gives little reason to care about this massive world. If you’re not in on its tone, lore and character, the movie makes no compromises about letting you into this world. As such, this is a fantasy epic where the non-gamer viewer will feel like the odd duck out at a party they weren’t invited to. As one critic once referred to the failure of 1984’s Dune, fantasy should be an escape, not homework.