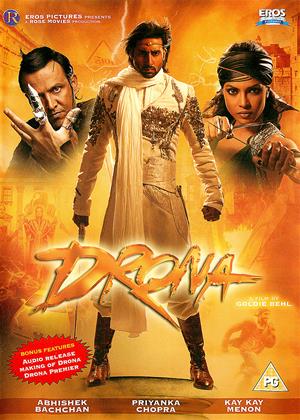 Drona is a mythological story written in the Indian style of gods and the tasks they give humans. It is nice in that it is not yet another re-hash of the traditional stories, Indian TV I find gets awfully bogged down in these, rarely adding new stories which is a shame. So this one is an interesting tale, if a bit weak here and there. The Drona line - all the firstborn males are called that, but there is no indication they ever have more than the one child, are tasked with protecting the nectar of the gods. Why they cannot look after it themselves and why they cannot make the human caretaker immortal so he can always look after it beats me, but that's the story. The film starts with the usual sob story of the motherless little boy ill-treated by the saas, but there is a twist to that as he is there for his protection. However when discovered by the wicked demon all his neighbouring protectors who come to his aid seem to be very easily killed, and only one continues with him, his 'shadow', Sonia.

The fight scenes and effects are good here, but the plot gets lost by previously having a hugely long song and dance scene which in my opinion comes too early in the film. It also inexplicably has him dancing with a little found dog as a companion which is sweet, but then the dog is forgotten and one wonders what became of it, did he just abandon it? The film seems to be set in Prague, yet the accent some people speak is Cockney London - what the? A little continuity or correct scene setting would have been better here.

The rest of the tale transports you more to the medieval past with the palace, shrines to the dead and mythical city, he seems out of place with his modern western gear - where are these lands where it looks like 500 years ago?

Despite these issues the story rolls along well enough, the effects are very good, I especially liked the clever but creepy faces of his ancestors in the sand presumably giving him advice, and the comic book sections of back story.

It was great that both Sonia and Drona did most of their own fighting and stunts and it was good to see an actress doing a bit more than just looking pretty. Other characters apart from the demon tended to be a bit sidelined, the queen stood bemused in the path of evil magic flying towards her where normal people would have jumped out of the way, especially if they knew how wicked their enemy was which she did. The demon killed his clone yet this was puzzling too as he turned out to have hundreds of them already so why kill that one without any good reason, not letting it develop?

That apart, the music was pleasant and the puzzles and challenges quite impressive, with the later implied threat indicating perhaps a sequel or perhaps them not being as successful as they thought. So yes I enjoyed it, but it did lack something.