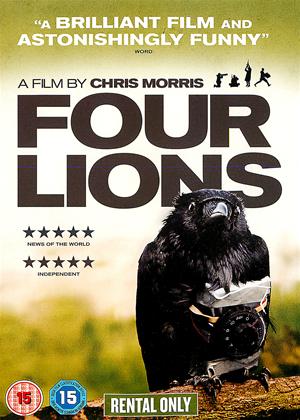 Synopsis:
Chris Morris' "Four Lions" is a funny, thrilling comedy that illuminates modern jihadism through the prism of farce. It understands jihadists as human beings. And it understands human beings as innately ridiculous. What "This Is Spinal Tap" did for heavy metal and "Dr Strangelove" the Cold War, "Four Lions" does for the modern face of terrorism. In a British city, four men have a secret plan. Omar (Riz Ahmed) is disillusioned about the treatment of muslims around the world and is determined to become a soldier. This is the most exciting idea Waj (Kayvan Novak) has ever heard. Better still it's a no brainer because Omar does his thinking for him.
Opposed to Omar and everyone else on earth is the white islamic convert Barry (Nigel Lindsay). He'd realize he joined the cell to channel his nihilism - If he had half the self knowledge of a duck. Faisal (Adeel Akhtar) is the odd man out. He can make a bomb – but he can't blow himself up just now coz his sick dad has "started eating newspaper". Instead he's training crows to fly bombs through windows. This is what Omar has to deal with. They must strike a decisive blow on their own turf but can any of them strike a match without punching himself in the face?
Actors:
Will Adamsdale, Riz Ahmed, Adeel Akhtar, Arsher Ali, Nigel Lindsay, Kayvan Novak, Julia Davis, Craig Parkinson, Preeya Kalidas, Wasim Zakir, Mohammad Aqil, Karl Seth, Waleed Elgadi, Alex MacQueen, Shameem Ahmad, Jonathan Maitland, Marcus Garvey, Darren Boyd, Kevin Eldon, Adil Mohammed Javed
Directors:
Christopher Morris
Writers:
Christopher Morris, Sam Bain
Others:
Chris Morris
Studio:
Optimum
Genres:
Comedy
Awards:

If you watch one film this year, watch this one.

Unlike the vast majority of trashy and crude, unfunny 'comedies' that spew out of the Hollywood teen-machine, (or the dull unfunny stuff that the subsidised British film industry usually produces), this film is FUNNY! it's really REALLY funny in its intelligent satire.

But probably, it'll only appeal to intelligent audience of course, so it's not a big hit really. Also, dumb Americans will be baffled by it (well, there are no explosions or crude visual gags involving bodily fluids...)

But, it is not simply cariacature - it has a dark, serious and timely theme. It also has guts: it has the courage to address the problem of Islamic extremism in the UK, a subject the BBC for example is too scaredy cat cowardly, weak, politically correct and desperate never to offend anyone religious/ethnic to ever address.

I found this film to be one of the funniest films I had seen in a long time. Having a typical british sense of humour helps, as from the start, these 4 misfits gag their way through the film.

If you are easily offended, particularly if you are of Muslim background, you may not agree with this. I am an Asian and am pretty thick-skinned about political correctness. Take it with the intention it was made; a self-deprecating look at extremism and its connetations.

There is a pretty pathetic attempt at pulling the heartstrings at the end, however it is token. One for the boys methinks

This film is near the knuckle in terms of taste - what do you expect from Chris Morris? It's a laugh out loud comic film but towards the end it is far from funny. Not everyone's cup of tea I expect but i enjoyed it much more than I thought I would

The first time I watched this, I didn't like it for 3 reasons. It is near the knuckle. This is a film that goes very close to stirring up Muslim stereotypes. The second reason was the bickering and whining within the group and the third that some of the characters are extremely superficial.

The second time I watched it, it was a lot funnier. Maybe the Muslim topic is now less taboo, maybe I knew the silly scenes and was looking forward to them, maybe I was in a better mood. Who knows, but the Bazooka scene is worth watching 20 times.

Not for me, I'm afraid - Four Lions review by Lee

I am not generally easily offended, and appreciate a good black comedy, but I did not find this funny. There were comedic moments in the early part of the film, but having been at the Ariana Grande concert in Manchester on May 22nd 2017, and stood before the torso of a suicide bomber, I must say that the latter part of this film did not make me laugh in the least. I chose to watch this film because I generally like to laugh at such things, and appreciate the work of Chris Morris (the director) and his sense of 'humour', but this did not connect with me. Having experienced a terrorist atrocity first-hand, and suffered what was described as classic post-traumatic stress disorder by my GP, this was just too close to the bone ....... for me the film stopped being remotely funny after about 50 minutes, and my partner had sensed that it had disturbed me because I was silent for the last half hour.

You might think the subject matter of suicide bombers is far from a suitable subject for comedy but this film is very funny, just not in a laugh out loud way. Chris Morris and the cast actually achieve the difficult task of making the potential bombers sympathetic characters.