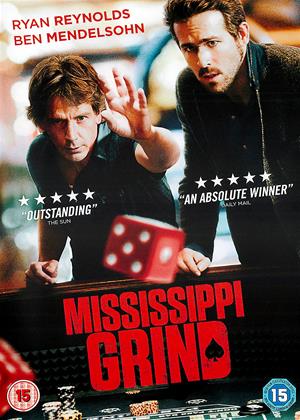 After reading some very good reviews, and being an admirer of Ryan Reynolds's work the past few years, I was looking forward to this film, but it was a huge let down. There's nothing bad about it, really, but nor is there anything good - it's not original, it's not brilliantly played or directed, the story can't make up its mind whether it wants to be straight or a bit of a spoof, and quite frankly, I lost interest in the whole thing after no more than an hour. By all means see it if you want, but there are so many better films than this that warrant your time and money.

What's not to like? Gambling road trip through America, count me in, or should I say deal me in. Both lead actors are in top form in this film for grown ups. If you are expecting car chases and shootouts look elsewhere because this ride is a gritty yet realistic meander through the highs and lows of gambling addicts chasing their dreams but ultimately not wanting them to become reality - If you win big there is no reason to gamble any more. For me the film strongly evoked the experience of watching films like Scarecrow with Gene Hackman and Al Pacino and this is praise indeed. When Hackman was asked to name his favourite film it was Scarecrow. Suffice it to say that comparing any film with works from the 'New Hollywood' of the late 60s and early 70s means that you are in for a great experience.

I did not expect to love this movie so much - having seen so many tired road movies - but I absolutely loved this.

Strong characters, great acting, a brilliant blues soundtrack - and unexpected scenes and plot points all make this a superb watch for thow who have some patience. 12 year olds can stick to superhero nonsense and explosions.

5 stars. 4 for the movie and an extra 1 for the lush blues soundtrack.

To be fair never bothered to watch it for very long, as just another US film about folks dossing around

Doesn't know what it wants to be. - Mississippi Grind review by CC

A comedy could get away with this plot but this film really isn't funny.

As a serious tim, it seems to be deeply irresponsible.

And frankly, it's pretty slow.

My first impression of Mississippi Grind was that of a bizarro Rain Man. I initially equated the performances of Ben Mendelsohn and Ryan Reynolds to Dustin Hoffman and Tom Cruise respectively. Mendelsohn has a quiet and calculated sense to his character whereas Reynolds is more easygoing and vocal. The bizarro claim is on the basis that Reynolds is the lucky chip while Mendelsohn is in desperate need of a win. But as the movie progresses and further develops the relationship of these two characters, it becomes its own bittersweet tale that can slightly distance itself from being another watered down version of The Gambler.

Gerry (Ben Mendelsohn) meets the charismatic Curtis (Ryan Reynolds) at a poker table. Gerry is down on his luck and become convinced that Curtis is a lucky charm after being stabbed when Curtis leaves a bar. The two join forces to go on a gambling quest for more money - from the dog track to the casino to high-stakes poker in seedy joints. Their trip isn’t glitzy or glamorous as most gambling films would revel of in the spectacle of it all. These two have something they want out of life besides money. Curtis desperately wants to acquire the love of his life. Gerry just wants to payoff his debts and do something nice for his six-year-old daughter he let down. Their journey is a somber one that is more riveting for how they deal with their distorted lives than whether the next card drawn is an ace.

We get to spend plenty of time with Mendelsohn and Reynolds that their relationship feels genuine. They chatter during a car trip about the tell of an age and find themselves laughing over drinks with a very intimate tone. Reynolds is his usual self as a sweet drifter who can make just the right joke and deliver just the right amount of affection. But Mendelsohn who steals the show more than anything. Sitting alone in a room with a girl, he finds himself vulnerable and confessing things he wouldn’t normally tell strangers. There’s a very uncomfortable moment when he visits his ex-wife to see his little girl. His daughter is not home. His ex-wife is still furious with him that she’s cut out his picture from photographs. He has damaged this relationship. And considering how he makes a desperate attempt to take money from her sock drawer to land a big score, he may never be able to fix what was broken.

The picture is perhaps too sad, however, as the pressure continues to mount on Gerry. While the movie does take a solid aim at self-destructive habits, it never really felt as though it culminated. Mendelsohn and Reynolds walk the line of comedic and dramatic banter, but it’s perhaps too natural that you wish the film would go a more fantastical route. We watch these two play off each other, inspire each other and conspire against each other to reach their goal of a big win. Their performances are decent, but the never comes a moment when you’re rooting for them to win. Big money will only put a bandaid on their deeper wounds. There comes a point when you just don’t care if they win.

Directors Ryan Fleck and Anna Boden craft a very traditional picture in the depiction of the sorrowful gamblers with a country soundtrack, modest lighting and a passively somber atmosphere. It’s just rather unfortunate that it’s hampered by slow pacing and a meaningless adventure. Mendelsohn and Reynolds do well with the material they’re given, but their solid performances do little to lift the characters out of their inescapable pit. Mississippi Grind is akin to going to a poker table and losing three hands after winning two. You didn’t completely waste your time, but you sure felt like you did.