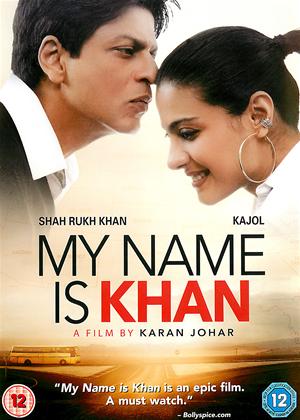 Synopsis:
My Name Is Khan is the triumphant story of an unconventional hero and the obstacles he must overcome to regain the love of his life. Rizvan Khan, a Muslim man who has Aspergers Syndrome, moves to San Francisco and falls in love with the beautiful Mandira. They marry and have a happy life; until September 11, 2001, when attitudes towards Muslims undergo an alarming change. After a series of tragic events leaves her devastated, Mandira splits from Rizvan, leaving him alone once again. To win her back, Rizvan embarks on a touching and inspiring journey across America to clear his name and prove his love to the woman who has captured his heart.
Actors:
Shah Rukh Khan, Kajol, Sheetal Menon, Katie A. Keane, Kenton Duty, Benny Nieves, Christopher B. Duncan, Jimmy Shergill, Sonya Jehan, Parvin Dabas, Arjun Mathur, Sugandha Garg, Zarina Wahab, S.M. Zaheer, Arif Zakaria, Vinay Pathak, Sumeet Raghvan, Tanay Chheda, Navneet Nishan, Arjan Aujla
Directors:
Karan Johar
Writers:
Shibani Bathija
Studio:
20th Century Fox
Genres:
Bollywood, Drama, Romance
Countries:
India

Reviews (6) of My Name Is Khan

Modern fairytale - My Name Is Khan review by CP Customer

This is a flawed gem. It's too long, has a slow start and tips perilously close to sentimentality, but somehow it works. Khan is set a Herculean labour before his very beautiful lady will accept him. He has to show her somewhere in San Francisco she hasn't seen before, and he does. Later there is another labour to perform: he has to meet the president and tell him that Khan is not a terrorist.

The story is threaded through historical events from 9/11 to the election of Obama. What is most powerful is the wisdom given to Khan by his mother, that there are people who hold flowers and people who hold guns, and he must learn to distinguish.

That Khan has Aspergers Syndrome gives him an innocence to win hearts. In many ways, this storyline is following that of Wolfram von Eschenbach's story of Parzival finding the Grail.

Without those flaws of pace, this would be a five star film. Highly recommended.

I need proper subtitles for anything I watch, I can't do without them. However, if I used HOH subs on this disk, they conflicted with the translated Urdu - it simply wouldn't bring up the English translations of Urdu (and other languages) if I used HOH subs! Trying to understand two people speaking clearly in English can be difficult enough for me, but next to impossible when trying to understand a fast conversation in heavily accented English (never mind Urdu!). Sorry, but I couldn't get past twenty minutes, due to this bizarre subtitling conflict. Beware HOH customers.

Brilliant - My Name Is Khan review by CP Customer

Chose the film purely on previous reviews and was not disappointed. Some great messages within touching on good and bad, love and hate, racism and religious bigotory. The wife went through a box of tissues, best film I've watched for ages.

A beautiful film. Other reviewers have pointed out it is a little too long and the subtitles are poor (too small to read without your nose pressed up to the screen). In fact, it borrows from the Hindi romance genre, and these are often long. The structure is boy meets girl, fall in love, difficulty and (hopefully good) final outcome. The film plays with this convention by interspersing the story with what would in a hindi movie be song and dance routines, but the joke is that the heroine cannot sing and the hero cannot dance. There are what would have been duets in beautiful scenic backgrounds, chorus song and dance scenes, but they are integrated into the film in a natural way so that you hardly notice them.

What is different about this film is firstly that the hero has Asperger's syndrome. The first half of the film is like a light, tender comedy based on this, and the second half is what happens to him after 9/11 because he is also a muslim, which is altogether darker. The second part of the film takes the form of a quest, which the hero undertakes to win his lady's love back. It is like a road movie in which he meets various characters in different places and does what he can to change their view of him as a muslim. Even in the darker second part, the film never loses its sense of humour and never quite totally falls into sentimentality. I felt that the rigorous scene - chorus - scene structure broke up a lengthy film so that it doesn't feel too long. I absolutely loved the layering of these more serious themes onto the structure of a simple fantasy romance.

Beautifully done - My Name Is Khan review by CP Customer

This film was excellent, an unconventional love story, realistically portraying the difficulties of being different in more ways than one. Emotional, funny, sad and uplifting.

A bit of a chore to read the vast amount of subtitles which were quite small text (even on a 42"),which made it a challenge for my 12 year old to sit through.

AMAZING - My Name Is Khan review by CP Customer

This film is a wonderful story, and the fact that it is 2 and a half hours long put me off a bit to start with, but the time flies by so quickly. It is a beautiful story of life and love and peace and i would reccommend this film to everyone.