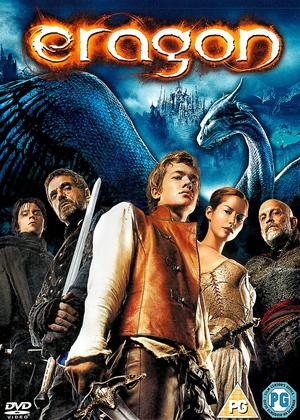 Not one thing that happens in this film is true to the book, it was so ridiculous it made me feel quite angry! This film was like an incorrect clip show of bits from the book. Read the book instead!

Villians, swords and a Dragon - Eragon review by LindiW

I didn't actually expect to enjoy this film as much as I did as I am usually a Sci-fi fan, so I was pleasantly surprised.

This is the kind of film you want to watch on a lazy Sunday afternoon and is a good family film or like myself just a nice easy enjoyable film to watch with the dog when you are feeling a little 'delicate' from the night before. Its not the most original storyline but it had enough of a storyline to hold up in its own right. There were thrills, spills, tears, laughter, action and magic...oh and lets not forget the dragon!

Fun for everyone - Eragon review by CP Customer

This story is about a young boy called Eragon. I do not want to spoil the story but lets just say that there are Dragons, beautiful Princesses, hero's, Scorcerers, and Warriors of various kinds. Eragon has to learn to be a man and rescue virtually everyone. But who will help him? What on earth is this blue stone that he found hunting? He will soon find out.

A decent array of actors in this film. Jeremy Irons is not the main character but he plays a good part. This is really quite good for all the family from the age of about 8-10 I would say. Any younger and they may be frightened by the special effects. No gore though.

The effects are good and the story line is strong enough for adults to watch with or without the kids. It is not as dark as Lord of the Rings but it is enjoyable and leaves you with a warm feeling when it has finished. Which will probably be due to the fact you have been glued to the TV and have not gone for a toilet break.

Lord of the RIngs for children - Eragon review by CP Customer

My family and I really enjoyed this film. My children are 10 and 8 and they were totally enthralled by it. It definitley has elements of Lord of the RIngs - fantastic characters with amazing abilities. The story grips you from the start.

I loved the relationship between Eragon and his dragon - very sweet and very believable.

This film is a must for families with children of the right age. We watched it about 6 times and would definitley watch it again.