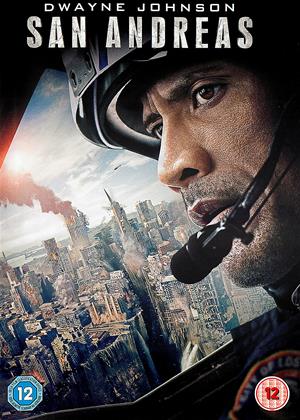 Well, the acting's wooden, the CGI sfx spectacular and OTT, the conclusion silly, jingoistic, sentimental as expected in Hollywood disaster flicks. The lead character, a former wrestler I believe, is impossibly pumped up with biceps the size of most people's thighs! Hilarious!

Some bits are really funny. For example, the two British brothers, incl the younger teenage one, don't even slightly giggle at the name NOB hill - and the 13/14 year old reads in his San Francisco guidebook that 'nob' refers to the 'snobs' who lived there. Errr well it means something else in British English too (Americans have such a paucity of good rude words - way fewer than we Brits!)

Anyway, remember all those disaster flicks like Twister, the Day After Tomorrow et al - well, this follows the template of those almost exactly. Some silly relationship nonsense pads out the plot before the action - and predictably we have to have a young woman character who is like superwoman (who'd have thunk a 20 year old girl student would be an expert in electronics and civil engineering eh? LOL!)

A Welsh actor plays the baddie - and the thing was made in Australia with tax credits from Canada!

But what you see is what you get - and we KNOW what to expect from movies like this. It's a B-movie basically but a good fun watch to pass a Saturday evening with a takeaway! So 3 stars. At least it doesn't pretend to be someone it's not like so many pretentious US films.

Top of its genre. Most enjoyable. - San Andreas review by none

Five stars - surly not?!! Yep, five stars. Everyone knows what sort of film this will be, and to penalize it for not being an intellectual groundbreaker would be unfair. Speaking for myself, I just LOVE geological disaster movies, and if you share my tastes in escapist films - when you want to watch escapist films that is - then this one ticks all the boxes. I loved it! It has all the right ingredients: predictable to a tee in the total plot but had me on the edge of my seat the whole time. I've been more mean with my stars to films that try to do much more intellectually, and fail. This one's just a really enjoyable film for those times that you don't want to think too much.

Vaguely entertaining, even if the plot is entirely obvious.

Ok a dissaster film, we know what to expect. Great special effects , the story isn'nt bad all so. Dwane Johnson ( the rock) probably his best acting role to date . It's worth watching if you haven't seen it yet.

What exactly does one expect from these natural disaster pictures? Gene Siskel once remarked that with the tornado disaster movie Twister you know you’re going to get fantastic special effects from Industrial Light and Magic - so why not create a great script around it? The answer was simple: Twister didn’t have a script when it was first presented to producers as a special effects reel and purchased upon first glance. Given the progression of disaster movies since that point, it’s hard to deny the formula. Based on the history of this genre, there are only two types of disaster movies that fit into my critical range: they either do exactly what they’re supposed to or they annoy with their stupidity. The most glowing recommendation I can give for a film like San Andreas is that it wasn’t so ridiculously goofy in its thinly written plot for destroying California.

It helps to have a decent cast not hamming up this ride. Dwayne Johnson is always such a likable actor with tough, yet cuddly, aura on screen. He has to use every ounce of his charisma to make you care for Ray the EMT worker that abandons his post for his daughter and on-the-rocks wife. The good news is that he does at least show some concern for protecting the populus, even if it is only the ones currently in proximity to his family. He directs people away from a tumbling building, carries an injured girl to safety and even beats up a looter holding a gun to his face. There’s plenty of room for “The Rock” to flex his muscles with this one. Paul Giamatti does his thing as the nervous geologist trying to warn everybody about impending doom before it’s too late (and then really is). And Carla Gugino and Alexandra Daddario fill out the roles just fine as Ray’s wife and daughter respectively.

But, of course, the big star here is the city itself - succumbing to mother nature’s wicked terrors. Director Brad Peyton packs the screen with plenty of destructive eye candy that you’d expect from such a popcorn-munching movie. Buildings topple into one another, holes open up in the Earth, raging waters rush through the streets and a massive wave of water engulfs the Golden Gate bridge. Most of these spectacles are par for the course, but Peyton adds in extra detail to make the city destroying all the more exciting. Ray’s wife is caught in a collapsing building where she witnesses rooms and stairs crumble with people dropping to their deaths. The Hoover Dam cracks and breaks off into the river in an amazing sequence. In one of the more ridiculous moments, Ray decides the only way to survive a large tidal wave is to go over it with a boat. Just in case that isn’t thrilling enough, Peyton throws a surprise tanker at the top of the wave as well.

What helps keep the tension pumping is how human the family drama is made by such likable characters. It’s nothing miraculous for this genre, but it sure makes you actually care about who will live and die when chaos unfolds. Perhaps it’s best that most of the characters are kept at a distance, longing to reconnect with loved ones as opposed to making them resolve conflict during lulls of the disaster. There’s barely a moment for anybody to catch their breath or allow for any inane and soapy dialogue. Wave after wave of nature’s wrath pummels the screen and the characters. There is no grand scheme to stop this or powerful resolution to the family conflict. Ray just needs to find his wife and daughter, get in, get out and salute the national guard.

While San Andreas offers no big surprises for the disaster genre, it’s at least competent enough to be a pleasing popcorn flick. There’s nothing here that will turn heads, but plenty to keep the eyes open. It’s a movie that knows exactly what it wants to be and plays exactly to its strengths, filtering out the common shortfalls of forcing flawed human drama or playing the events up too comically. It is what it is and it does a satisfactory job. Nothing new and no disappointments. Just a thrilling experience watching California turn to rubble as people scurry for their lives.