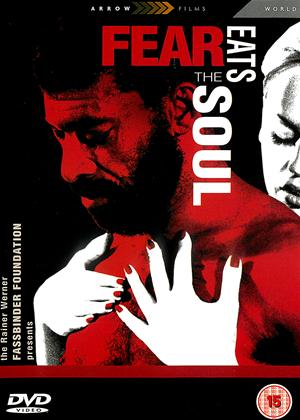 Cinemadiso's 1970s In Films Vol. 2
14 films by cinemadiso
Frankie's 1001 Movies You Must See Before You Die
982 films by frankie
HumilityPrim's Favourites
159 films by humilityprim

Reviews (1) of Fear Eats the Soul

This is only the second film I’ve seen by acclaimed director Rainer Werner Fassbinder, and on the strength of this and ‘Why Does Herr R. Run Amok?’ I intend to watch all projects completed in his short but prolific career.

I tend to go into these things spoiler-free, so expected this to be some kind of horror story, given the title. And it is very much so, but not in the way I imagined. It’s impossible to discuss without spoilers, so beware!

We’re concerned with elderly Emmi (Brigitte Mira), cleaner and widow, who enters a bar alone one night. Vulnerable and ostracised, only Ali (El Hedi Ben Salem) is friendly towards her and asks her to dance. The awkward exchange turns into unlikely romance which, for a slow-burning film, escalates quickly, and the shock Emmi’s family express when she announces she is marrying a Morrocan man twenty years her junior would be understandable – if they weren’t such a gang of self-serving grotesques. Emmi’s daughter Krista (Irm Hermann) is first seen in a domestic situation where she is ritualistically taunted by her objectionable husband, played by Fassbinder himself. Krista’s subsequent behaviour, however, proves that she is just as disagreeable as he is. And this is the premise for the film. Everyone is flawed, often in deeply prejudicial and unkind ways.

Apparently Mira found herself somewhat spurned whilst making the film, and while she rose above it, this possibly feeds into the vulnerability of her performance. A lesser director would be satisfied with the story-line as outlined above, but not Fassbinder. As the hostility eventually gets to Emmi – she and Ali are really treated appallingly – they go on holiday together, hoping the dust might have settled on their return. And when they get back, her ‘friends’ and local shopkeeper have clearly decided to treat the couple better, but only because of what they gain from the friendship, rather than displaying genuine decency.

So glad to be once again accepted, even Emmi shows signs of their unkindness – tellingly toward a new member of their cleaning team. This new member is on less pay than the rest of them and is shunned because of this, left to eat her dinner alone, while the others gather and gossip about her. Emmi’s attitude to her husband changes too – she treats him like a trophy, an object, in front of her friends. When he leaves her, she tells them it is due to his ‘foreigner mentality’. In turn, when Emmi comes to visit him at his workplace and entreats him to return home, he ignores her as his co-workers describe her as his ‘Morrocan granny’.

This is an excellent film, often cited as Fassbinder’s greatest work. As director, producer and writer, he almost tends to simply point the camera at his cast and wonderfully utilised downbeat surroundings, and let the story tell itself. This it does beautifully and deceptively simply. Could I describe Fassbinder as a kind of West German Mike Leigh? That’s how he appears to me.

Incidentally, a Wikipedia search reveals that for Fassbinder and his star Salem, real life was possibly more eventful than their fictional works. My score for ‘Ali: Fear Eats the Soul’ is 8 out of 10.