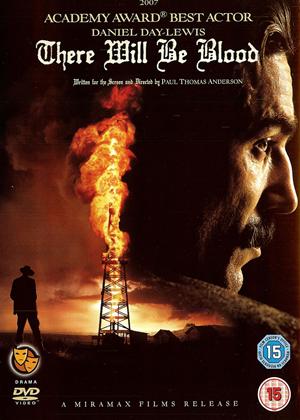 Reviews (13) of There Will Be Blood

Featuring a titanic performance from Daniel Day Lewis as a ruthless and dark Califonria oil tycoon in the early twentieth century - this is a relentlessly intense film. The first 15 minutes give you a taste of what the film is about - remarkably played out without any dialouge as Daniel Plainview (Day Lewis) works a mine shaft on his own, suffering injury, before striking oil deep in the heat of New Mexico. The film covers the first three decades of the twentieth century, as Plainview becomes a ruthless tycoon whose ememies are man and God. And in the film's final section, Plainview takes his revenge on both. As well as the Day Lewis performance - what is also deeply impressive about the film is the electronic score which literally fills the screen with dread and foreboding. An intense and brutal cinematic experience.

14 out of 19 members found this review helpful.

Paul Thomas Anderson's 'There Will Be Blood' quite simply is astonishing. Full of mood and dark themes, the film seems to evoke films like 'Bridge over the River Kwai' and 'Aguirre the Wrath of God' as well 'Citzen Kane' (which was an obvious influence).

It follows Daniel Day-Lewis, in one of the greatest performances ever committed to film as he searches for enough fortune to completely seperate himself from those he hates - which happens to be everyone.

The tone is bleak and could be too slow for those with shorter attention spans. But if you can sit through two and half hours of brilliant atmosphere, perfect acting and one of the most famous ending in recent history then you're in for a treat. Can't recommend it enough!

Pointless and a waste of time - soundtrack is awful! - There Will Be Blood review by CP Customer

Have some of these reviewers been paid to give good reviews? Apologies to those who enjoy the film but I was deeply upset by the 2 and a halfish hours of my life that I had wasted!!! The soundtrack was appalling - did not go hand in hand with what was happening in the film. For example - really tense (and strange) music would be played at a very boring moment of nothing happening.

The only good from this film would be the acting delivered by Daniel Day Lewis. Easily one of the greatest actors of our time but I wonder why he accepted the script. I suppose I don't usually go for the 'dramas' due to lack of action - but this really is sour and I would never ever watch it again. The story was pointless and left both me and my husband frowning at the TV set when the credits rolled!!

5 out of 12 members found this review helpful.

Maybe the hype was too great, the weight of such expectation led to me finding this wanting. The narrative drive in oddly unchallenging, events are played out at a steady pace, and the action is uninvolving. The characters are uniformly unlikeable.

On the plus side: The music and cinematography is astonishing.

The ending, unfortunately, made me laugh which I'm sure wasn't the intention.

A towering film - There Will Be Blood review by CP Customer

An instant classic, one that lives on long after you've seen it. Clearly Daniel Day Lewis is in immense form here, dominating the film with his greedy oil man character.

Yet let's not lose focus, Anderson has done a tremendous job with the supporting cast and locations. If there is one film released in the last few years that you must see, then it must be There Will be Blood.

Brilliant - There Will Be Blood review by RC

Very pertinent. The beginnings of the Oil business, the corruption of false prophets at the local evangelical church. One mans battle to remain sane in the face of religious fervor of the evangelical kind in America.

Disturbing - There Will Be Blood review by CP Customer

I rented this film because of Daniel Day-Lewis, an amazing actor. Well he was as good as ever but I found this film disturbing. The acting was very convincing but it was hard to watch the characters do what they did! (not giving anything away).

I really enjoyed this film. I love Daniel Day-lewis and this is him at his best. It left me feeling happy and sad all at the same time.

There Was Blood - There Will Be Blood review by CP Customer

I had mixed feelings about this film. I found the build up with its credible account of the early days of the oil business fascinating. The dialogue was at times tedious and the story-line slow but the panoramic views of Texas and California and the plot driver - the search for oil - more than compensated for these flaws. The charm gradually wore off as an intense dislike of the central characters grew. At the end the tediousness took over in the increasingly pointless battle between the two central characters. I was left with the overall impression of a cruel and nasty film.

A Bona Fide Masterpiece - There Will Be Blood review by PT

Immense. The greatest acting performance I have ever seen. That is how much I think of the performance of Daniel Day Lewis in this epic film. D D Lewis plays an oil prospector, and the film charts his journey from a penniless individual with a few hand tools to a multi corporation tycoon.

The bowling alley scene at end completely blew me away. 100% something else.