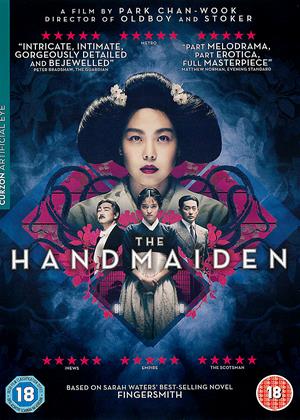 Reviews (15) of The Handmaiden

Superb Korean masterpiece - The Handmaiden review by AM

Another example of how Korean cinema can teach Hollywood a thing or two about storytelling and exquisite imagery.

Beautifully directed and acted with ever fluctuating sensuality and intrigue. The story takes twists and turns and dead

ends in a sleight of hand manipulating allegiances all the way to the denouement.

12 out of 12 members found this review helpful.

As a fan of Korean films and having just watched “The Handmaiden” I can honestly say it is probably the best Korean film I have seen.

It is directed by the great Chan-wook Park, of ‘Oldboy’ fame and if you have seen any of his films before you will know that he is renowned for a particular style, with gorgeous cinematography and quirky plots, and he can never be accused of being restrained.

The Handmaiden is based upon the English novel ‘Fingersmith’ which was set in Victorian England but The Handmaiden translates the story to 1930s Korea when the country was under Japanese occupation. The subtitles are helpfully in yellow when Japanese is being spoken and white when it is Korean, and this is quite important to understanding the plot.

It tells the tale of a young girl from a family of thieves who takes part in a plot to defraud a rich Japanese heiress of her money by helping a crook who poses as a Count to marry her, put her into an asylum and steal her fortune. However the girl who is put into the role of the handmaiden starts to fall for her mistress and from then on things get complicated. I will not elaborate more on the plot as it is quite involved and full of unexpected twists. There is little more I could say without spoiling it.

The film is extraordinarily beautiful. It is sometimes said about films that each frame is like piece of art and this is very much the case here. The plot is intricate and twisty, the acting is superb, the costumes and sets are magnificent and the score is pretty damned good too. To me it was faultless.

But be warned. There are some extended scenes of quite explicit lesbian sex so if that sort of thing bothers you then it may not be for you. However these scenes are tastefully done and never vulgar. There are also some disturbing scenes of torture near the end so it is definitely not one to watch with the kids. The film is also two and a half hours in length but it had me gripped all the way through.

So if you like art house films of an adult nature, that explore love, treachery and some of the darker sides of humanity then I would highly recommend it. If you are someone who likes Hollywood style action films and can’t do subtitles then it wont be for you. Hollywood could never produce something like this.

The film gained widespread acclaim at the Cannes film festival and has a pretty decent 8.1 score on IMDB.

Clever adaptation of Fingersmith - The Handmaiden review by PL

This is a Korean adaptation of Sarah Waters' Victorian novel Fingersmith. It is beautifully shot and faithful to the novel despite its recasting from Victorian England to 1930s Korea. It is a little over-long at nearly two and a half hours.

Overlong and tedious - The Handmaiden review by PH

Beautifully filmed, ravishing sets, but in the end I had to go to IMDb synopsis to discover what it was all about , even then there were huge plot gaps , and by the end , I didn’t really care . I would send the lot to the mental asylum to sort it out between them ( see plot !)

This is a great film, brilliantly shot and featuring wonderful scenery and a story with a surprise twist near the end. The sex scenes were tastefully done.

Beauty and savagery - The Handmaiden review by DH

A film of intense contrast. Its extraordinary cinematography is a vivid celebration of beauty, whether it be the exquisite gardens, opulent interiors, or the arresting physical beauty of its two female leads and their passion for each other. But as a counterpoint to this there's some real darkness of the human soul depicted here too. Hard to describe without spoilers, but suffice to say there are moments of grotesque violence that left me shocked and queasy. And male sexuality is presented as something irredeemably grim and sleazy, perhaps again to emphasise the gentle sensuality of the love scenes between the women. The sexual content seems to have proved controversial, although to me it's a baffling indictment of our culture that simply showing two women making love arouses so much debate whilst the cruelty and brutality depicted elsewhere in this film passes without comment.

Whilst I certainly felt challenged by its strand of Gothic nastiness I'd still recommend as a memorable and affecting experience.

Beautiful film. Shame about the subtitles - The Handmaiden review by GP

Interesting film based on Fingersmith by Jeanette Winterton. Beautiful photography.

I just wish film would put their white subtitles on a black background. Very difficult to see at times against a light background in the film, and there are a lot of those.

Loved it - The Handmaiden review by BE

An unusual movie in three parts with many twists and turns along the way. Salacious in parts but in keeping with the story. Beautifully crafted and although over three hours in length, well holds the attention. After part one, you're never quite sure which direction it's going to go in. Intruiging

Slow, stately drama of love and deception set in 1930s Korea. More of a mood piece than a gripping tale. It has garnered praise for its acting, especially the two female leads, who indulge in some graphic sex scenes. These may be ground-breaking for mainstream Asian cinema, but the portentous orchestral soundtrack makes them unintentionally ridiculous. Divided into parts, you may well find that the by the time the film reaches a major plot point after an hour, to launch us into a Part 2 flashback, you no longer care.

Film critics who rave about acting and ‘brave’ sex scenes should stick to the theatre. Film is so much more than that and so, generally, is much of modern, exciting Korean cinema. As if the trailer makers understand this, they try to lure viewers to The Handmaiden by fast editing and an exciting soundtrack that is at total odds with the dullness of the film itself.

A nasty experience - The Handmaiden review by AKL

Pornography and sadism are the main features of this truly nasty film set in Korea and Japan in the 1930s. I might have enjoyed it more had I studied the historical background prior to viewing it. But I doubt it. It was much too long and the lesbian sex scenes, which the Director clearly

relished, became annoyingly tedious. And the sado-machistic scenes, though mercifully brief, were loathsome and unnecessary.