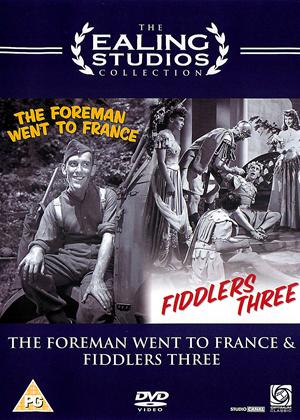 Synopsis:
The Foreman Went to France (1942)
As the Nazis invade France, a British factory foreman is sent to recover some valuable machinery that the British don't want to see falling into German hands. Based on the true story of Melbourne Johns, this film was made at the height of the Second World War and features an uproarious turn from Tommy Trinder as a fast-talking soldier who helps the foreman on his quest.

Sign up
The Complete Humphrey Jennings: Vol.2: Fires Were Started

One rather good, one dreadful - Foreman Went to France / Fiddlers Three review by quentinsf

The Foreman Went to France is a good wartime tale, and we enjoyed it.

Fiddlers Three is just plain silly, and this is reinforced by the characters breaking off in song from time to time.

Watch the first, and return it before bothering with the second!

During the Second World War there was a public taste for succour and solace in Classical works, whether in bomb-shelter sanctuary or during duty as a rooftop warden. The thought comes to mind while watching a lesser-known Ealing film Fiddlers Three (1944).

This springs many a surprise, not least that it is directed by Harry Watt, who had made many a notably serious documentary. This could hardly be called one of those. It opens with Tommy Trinder (a music-hall veteran) and Sonnie Hale on their way by tandem to join the Navy at Portsmouth, before which they chance upon a WREN in need of a lift. She (the pretty Diana Decker, who died last year) perches on front while the weather turns rough, and they try to take a short cut via Stonehenge, where they seek sanctuary beneath a tomb. That is not enough. Lightning strikes - and they find themselves not only back in Roman times but at the mercy of... James Robertson Justice, who, living up to the surname, sentences them to a year-long voyage to a Italy ruled by Nero (Francis Sullivan, a swollen dead-ringer for Zero Mostel), whose sultry wife (Frances Day) strokes a breast in a way to suggest that she is not averse to rival offers.

All of which leads to the time-travellers not only becoming part of various song-and-dance routines (with lyrics by future, brilliant, sadly-doomed director Robert Hamer) but seemingly on the point of being chomped upon by snarling lions who, one might surmise, were not fooled by Sonnie Hale's bravura turn in a Carmen Miranda outfit complete with puns about Eddie Cantor in Roman Scandals.

Naturally enough, and in the nick of time, all turns out well - but anybody who watches this might prefer not to return with the three of them to Stonehenge but to stay in Rome and risk the lions in hopes of watching again a wonderful turn - perhaps the film's best few minutes - by singer Elisabeth Welch who found such renewed fame decades later.

Meanwhile, how much did all this influence, in the mid-Sixties, A Funny Thing Happened on the Way to the Forum? Among its cast was... Zero Mostel.