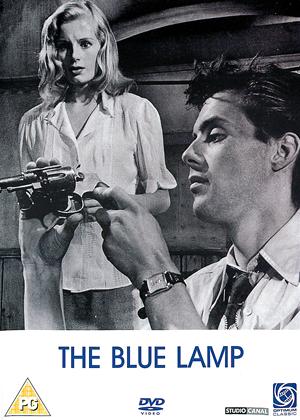 Reviews (2) of The Blue Lamp

This is the film that introduced - and bumped off - PC George Dixon (Jack Warner), later resurrected for the long running TV series 'Dixon of Dock Green'. In its day, it won a BAFTA for Best British Film - so, has it stood the test of time?

The answer must be Yes. It's a gentle film, showing a style of policing that is now long gone, the era of the honest, kind hearted bobby-on-the-beat, knowing everyone on his manor and expecting - and receiving - co-operation. Here, that works well as (nowadays a cliché) an experienced older cop takes a rookie under his wing, shows him the ropes and welcomes him into his home.

But this comfortable existence ends as young tearaway baddy Dirk Bogarde goes in for a bit of armed robbery - and shoots that nice Mr Dixon. There follows some nicely observed detective work, then one of the first police car chases in a British film, and a finale at White City dog track where that nasty baddy is trapped using tic-tac men to signal his whereabouts.

There is a wealth of period detail: cobbled streets, boys in short trousers, girls playing hopscotch, fishing in the canal, a range in the kitchen heating flat irons, trolley buses, police cars with bells, police call boxes, the general lack of traffic, the street detail around Paddington and the Edgware Road, Two Ton Tessie O'Shea, the actual Paddington Green police station - and of course, bobbies on the beat, helping old ladies cross the road and directing traffic.

I have two minor niggles. The first is the actress who plays the 17-year-old runaway Diana - she was 25, and frankly, looked older and screamed far too much. The other is more serious, although it still applies in today's films. Serious violent crime, in this case gun crime and the shooting of the police, is 'talked up' and there was supposedly a crime wave of young hoodlums roaming the streets. Except there wasn't - and the shooting of a policeman is a rarity. There was one such shooting in the Metropolitan Police area in 1948 (the year before the film was made) that of PC Nathaniel Edgar, and that was the first for 26 (!) years. The next one was the shooting of PC Sidney George Miles in 1952 in the notorious Derek Bentley case. Shooting of the police is a pretty rare event - George Dixon must have been very unlucky :(

Putting that aside, this is a good period police procedural drama, very well done, with lots of human touches, in particular the restrained grief of Mrs Dixon.

If you're of a certain age and can (fondly?) remember 'Dixon of Dock Green' from the mid 1950s through to the mid 1970s, watch this. And if you can't remember Dixon, watch it anyway to see a style of policing and a world that now seems so long ago.

Bogarde's Crook Steals It. - The Blue Lamp review by NC

Famous more for what came out of it than for the actual film itself, 'The Blue Lamp' spawned both 'Dixon Of Dock Green' and the rise of Dirk Bogarde. It is amongst the better of the British policiers made around that time, ('The Criminal', 'Gideon Of Scotland Yard'), but it's still hard to believe that without the Dock Green connection, and the obvious presence of a great star in the ascendant, it would be remembered so fondly.

Whenever Jack Warner played a nice bloke (often) there was always a tendency to make him just a bit too nice, too wise, to always let him have the irritatingly last word. jimmy Hanley is bland as Andy, learning his trade as a new recruit. Peggy Evans does little more than scream a lot. Bernard Lee and Robert Flemyng display their usual professional aplomb in familiar roles of detectives. Dora Bryan is great for the few moments she's on the screen. But it's Bogarde's film. Not quite the first time he showed the world that here was greatness in the making, ('Quartet' and 'Boys In Brown' came before), it is nevertheless a performance which only the very best could accomplish.

It is possible to see 'The Blue Lamp' as shining a light on acting styles. The old, solid style of Warner, no flim-flam, no gestures, little expression, contrasting with emotional Bogarde, transmitting hate, frustration, fear, determination by whatever means - even (magnificently) through the eyes only when necessary.

Just about worth watching as a film. Essential viewing for Bogarde fans.