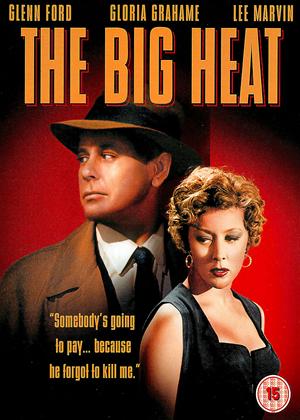 Reviews (2) of The Big Heat

Lang's best American film and the pick of the noirs of the fifties about Mafia corruption. Glenn Ford as Dave Bannion is an honest sergeant in homicide which means he is constantly frustrated by crime boss Mike Lagana who owns the police and politicians. Bannion gets warned off by his chief but after his wife is killed by an explosive meant for him, Bannion goes solo....

Glenn Ford is superb. But he is eclipsed by Gloria Grahame's virtuoso, show stopping performance as the good time girl who falls for the cop's burning obsession with revenge. She is so beautiful in this film, and she is inspired, hypnotic. There is a brilliant scene where she puts on her uniform, her fur coat, to kill the wife of a dead corrupt policeman (wearing the same uniform) which will release evidence of police criminality to the press: 'We're the same you and me. We're sisters under the mink'.

The Big Heat is a landmark crime film, because of its violence, its vigilante hero and its depiction of organised crime. Given a decent production budget at last, Lang created a brilliant mainstream hit (which tones down his usual expressionistic style). Practically everyone in this film is corrupt, but there are occasional very moving passages when some damaged person, usually with nothing to lose, sticks their neck out and helps Bannion. The kindness of strangers.

The heat is high. - The Big Heat review by RhysH

Sometimes in the American gangster film the baddies can be somewhat endearing, the villains you love to hate, not in this Fritz Lang film noir, the baddies are really bad. None badder than Lee Marvin as Vince Stone, his top lip perspires with evil.

The plot is precise and richly written by Sydney Boehm, some great one liners all of them barbed with evil. The most sinister aspect of the plot is the seemingly expendable role of the women, justice is done at the end but at the awful expense of the horrible deaths of the main women characters.

Glen Ford is great as the detective on a mission weighed down by worries and Brylcreem and Gloria Grahame reveals emotional subtlety behind her great looks.