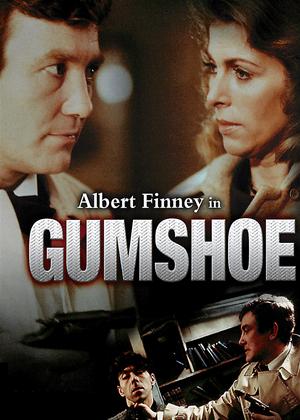 Demi-noir British crime flick. Showman-turned-private dick Eddie Ginley (Finney) on the trail of bungling underworld drugs and guns racketeers. Lean, taught, with quick silver dialogue, the whole woven together with a punchy, acerbic score by a young Andrew Lloyd Webber. Worth watching a couple of times to catch the full nuances of the plot and, of course, to see again the fabulous Billie Whitelaw. Very highly recommended.

Museum piece that has its moments - Gumshoe review by TE

'Gumshoe' was Stephen Frears's first director credit. In an interview amongst the disc's extras he is frank about the film's shortcomings. Most telling of all is the way that it falls between the two stools of comedy and thriller.

Eddie's would-be Chandleresque lines have not stood the test of time and come across as lame parody. After a while they become plain irritating! The humour is weak and it detracts from the rather complicated thriller plot.

Frears clearly learnt a lot from the experience of making 'Gumshoe' and many of his later films are classics (a personal favourite is 'The Grifters', which is a crime thriller that is everything 'Gumshoe' is not).

Despite all this, 'Gumshoe' is an interesting period piece, mainly due to its fine cast. Billie Whitelaw lights up the screen whenever she appears, and there are fun cameos by the likes of Fulton McKay, Maureen Lipman, Wendy Richards and the go-to man for Scouser parts, Billy Dean.

It's interesting to note that 'Gumshoe' came out in the same year as 'Get Carter', an altogether more timeless and effective British crime movie.

The routine use of racist language is also, thankfully, of its time.