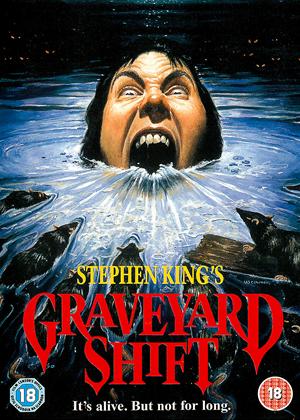 Sign up
Howling II: Your Sister Is a Werewolf

When dealing with King adaptations it's best to go in with low expectations. Few directors know how to handle the material just right. When they do (The Mist/Christine/Carrie) it makes for film alchemy. More often than not, you end up with a confused film that's largely a mess until the killing starts.

That about sums up Graveyard Shift. It wants to be a serious horror, but the plotting is too weak, the characters too juvenile and thinly drawn, and the effects too hit and miss to give a consistently exciting movie. What we get are the usual King tropes - a worn-down hero (David Andrews) takes on a tough job at a similarly worn down textile mill in a poverty stricken town. There he meets a girl (Kelly Wolf - feisty enough to be interesting) and angers the corrupt and dangerous manager (Stephen Macht, playing bad guy Warwick with an odd accent, a blend of cunning and violence, and looking confusingly like actor Fred Ward).

The mill is utterly infested with rats, and in a rush to avoid being shut down, Warwick cajoles some of his least liked employees into cleaning out the cavernous and biblically filthy basement over a sweltering holiday weekend.

It's then that they realise something nastier than Warwick lives on the premises...

With Andrew Divoff and Brad Dourif (as a quirky exterminator) rounding out the cast this could have been an astounding film. Unfortunately at this time studios viewed King's back catalogue as a gold mine for turning out quick cheap direct-to-video buck-makers, and this is treated no differently.

That said, the basement and the tunnels beneath it are revoltingly squalid and intimidating, and the creature is good quality and looks disgusting (although my other half felt the goo dripping off it was excessive - as if being used to hid bad special effects).

You get to see a decent amount of the monster, and the final portion of the film is an extended hunt and escape scenario with a decent amount of tension. Some of the effects are clearly matte-paintings etc, but that was common for the era and they're pretty impressive in their own right.

In conclusion, if you're a Stephen King completist, this is a must-view. It's flawed but entertaining, and well worth your time.