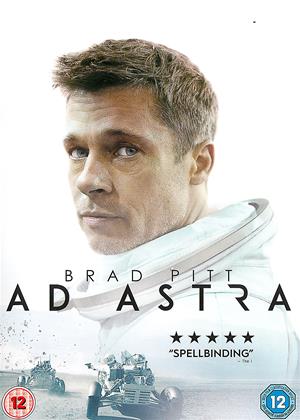 Minus 2 - Ad Astra review by MJ

I want to score this minus 2 simply for wasting 2 hours of my life that I will never get back. It's very slow going, very boring and has virtually no story to speak of.

The ending is useless too but don't worry about that because you don't want to be watching this pile of crap anyway so the ending is the least of your worries.

In summary, don't bother because it's one of the worst films ever made.

If you're expecting Aliens, Star ship Troopers or even the tripped out grandeur of 2001 A Space Odessey, this film isn't for you. Admittedly, it is slow, but not without merit. The story is an interesting one and although ultimately unsatisfactory, its still worth the price of admission. Pitt is quality here, to say that he is unemotional is a misunderstanding of the character he plays. His calm demeanour and level headedness under conditions of extreme danger are what gets him chosen for his mission. His one Achilles heel is the very object of his search, one which has cost him his relationship with his wife, played by the very easy on the eye Liv Tyler, who makes a brief cameo here. Much of the film is metaphor, which I fear, is the reason that some people just won't get it, but it does go to some lengths to show The Hero's Journey and the difficult and often dark choices which must be made along the way. The film looks very good and has a strange , almost 1970's feel. It is visually beautiful in many scenes but let down by a drab performance from Tommy Lee Jones and underwhelming dialogue in the end confrontation, which certainly could've been a lot better. Not brilliant, but definitely not the Pitts either.

Visually this is really impressive and hats off to the DP, art and props/sets depts and especially FX houses. What lets this film down is Brad Pit and the writing and directing. Long verbose monologues (telling rather than showing - I actually think this would have worked better without all the monologues.

The writing is poor - trying to be an exploration into farther son issues/relationships and absent farther etc. It falls short of its other goal of exploration, search for ETs and a viable story. It kind of has the same pretentiousness as interstellar and sometimes the same level of poor physics.

If you want good sci fi watch, Moon, Solaris, or 2001. Fundimentally its boring. The original Russian Solaris is near 3 hours long and is way more engaging. It's a shame because a lot of hard work has gone into this film but its script and direction are lacking.

The Immensity and Loneliness of Space - Ad Astra review by AB

I want to counterbalance some of the very negative reviews of this film. My wife and I really enjoyed it. If you want a fast moving, thrill-a-minute film, then this is not for you. If you might like a slow, contemplative film that examines the psychology of a loner astronaut, then we think you will also enjoy it. The film gives a powerful recreation of the immensity and loneliness of deep space, and the bravery and resilience of the men and women who venture there. Brad Pitt gives a strong performance as the lead actor. A film to make you think.

Astronaut Brad Pitt’s on his way to deep space via the moon, and the evocation of space travel, reminiscent of 2001, is fascinating to watch. He even flies to the moon on a Virgin commercial flight. Unfortunately the plot amounts to very little and winds down to a disappointing end. Add to that the ill-advised decision to have Brad regale us with whiny introspective thoughts in voiceover detracts from the immediacy of the visuals.

Despite this, Ad Astra is a four-star watch if only for its evocation of living and travelling in space. It’s a considered, meditative vision that gives a real sense of the emptiness of space and the solitariness of being there. To keep you on your toes, there are also bouts of exciting action when you least expect them. The destination may be disappointing, but the journey is captivating and beautifully evoked.

As usual with these sc fi films, arrival being one and blade runner 2049 another, they are highly praised by the critics. But what we have here is a very slow boring pretentious navel gazing lasting 2 hours with little reward as far entertainment. I didn't think it was beautiful as some have said. A disappointment to be avoided.

Even the bits which should be emotive or rxciting felt incredibly flat. I couldn't finish the film.

I came away from this a bit disappointed. As It has a great setup for great sci-fi romp.

However the film is ultimately little more than a drama about a father/son relationship. And the sci-fi is pushed to the back.

For sci-fi fans little is explained or expanded. Instead everything is focused around our leads feelings and whats going on in his and his dads head.

Its a quality movie however, its looks good for sure and the performances as youd expect are upto the task. But its simply far to drama heavy to make it of any real interest and left us feeling robbed and disappointed. Being good sci-fi is rare, it really is a wasted chance this film. We get drama under every setting, so why tease sci-fi fans this way?

3 stars as its a quality flick with big potential, but ultimately to much drama for its setting and premise.

For a space epic with lots of special effects, explosions and, yes, even pirates on the moon, James Gray’s Ad Astra is a somber surprise of science fiction. It’d be easy for a film as large as this, boasting a blockbuster scenario and a towering lead actor, to become lost in the muck of its own action and theatrics. To my delight, however, this is a deeply cerebral and introspective film that delves deeper into the psyche of a man trying to escape from himself and out towards the stars.

Major Roy McBride (Brad Pitt) serves as an astronaut in a future where mankind has expanded to the stars. Mars now has a military base, the moon is a tourist attraction and Earth now has gigantic structures that poke the atmosphere. Roy is considered an important asset to his government because of his lack of emotion. In the opening scene, we see how he handles a very frightening power surge and explosion on a tower hundreds of miles above Earth without raising his heart rate. Even with fires and falling people surrounding him, he keeps his cool and handles the situation as best as he can before dropping towards Earth in his parachute.

He serves another purpose as well. His father (Tommy Lee Jones) recently went missing on a space station around Neptune but the government believes he may be alive and causing shockwaves that is damaging other planets and space stations. With his family connections, the military believes Roy can talk some sense into his dad and not become emotionally vulnerable given his unemotional state. This is made clear from Roy’s many psychological evaluations and his distant nature from his wife Eve (Liv Tyler). He’s so distant he doesn’t even want her to touch him. There’s also a bitter past that Roy is shutting out as hard as he can.

Roy’s unemotional state may also make him the best candidate for a simplistic sci-fi action picture as well. Indeed, the first act of the film seems to set this all up. There’s a very matter-of-fact manner of dialogue on informing Roy of his mission and Roy’s voice-over explaining his world. There’s also plenty of action with Roy making a stop at the moon where pirates attack their rover in a chase where astronauts shoot at one another. But then, once the story shifts to Mars, the film becomes more than just theatrics. Roy comes to terms with himself and his father. Thanks to his dad’s best friend (Donald Sutherland), Roy soon learns that he’s not only being lied to by the government but that he’s also lying to himself.

What’s most wondrous about a film such as this is that it boasts fantastic special effects and a fully-realized future with its own technological advancements and conflicts of resources, all of it used to tell a personal story of man’s desire to escape. Curiously, I found the film does an astounding job showcasing traits of autism. The film never outright states that Roy has this condition but he has a lot of familiar traits and his internal thoughts are very reflective.

Ad Astra has all the brilliance of the engrossing somber sci-fi I love to discover. Brad Pitt is in top form by delivering a nuanced performance of a conflicted astronaut who learns forgiveness and sadness on a journey of self-discovery. The special effects are brilliant, featuring lots of zero-g segments and many of them action-oriented with amazing tension. The atmosphere feels rustic and believable, never once looking too futuristic. There’s such a grand sense of majesty to such a film that I just can’t get it out of my mind and loved every minute of it in the theater. This is undoubtedly one of the best films of 2019.