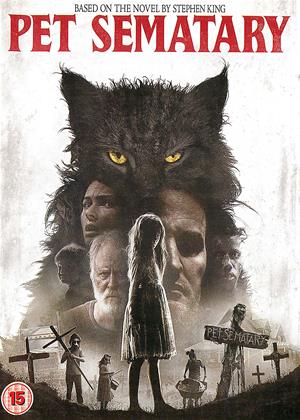 Pointless Remake of a Movie that Failed to give all it could have in the first place and Doubly so in this case .

Entertaining enough. but such irritating people . and Useless Parents that they hold a children's Party right next to a Murderously Dangerous Road .

This film is so full of horror movie tropes and cliches it sometimes feels like a cut-and-paste job. But then Stephen King was never original - he always just takes horror tropes and updates them. We all know what to expect and what's a-coming.

SO we get the usual jumps and scary, a native Indian sacred place (think Poltergeist), scary kids, weird old local with secrets, a graveyard, dead coming back to life like zombies or Frankenstein's monster, whispering voices, a dark scary forest and, of course, that cat - my favourite character in the movie by far, though I couldn't help noticing its resemblance to the cat in the Specsavers vet/cat/hat ad.

Why are cats in Hollywood movies always evil and dogs always good? Someone should write a PhD on that.

A well-made horror though and I enjoyed it for the hokum it all was, so 3 stars.

Mediocre horror adaptation of the Stephen King novel and a remake of the 1989 film. I'm not sure why this was selected for a remake because this new film is a pretty tame affair, rather clichéd and most definitely unscary. Louis (Jason Clarke) and Rachel (Amy Seimetz) move from busy Boston to a remote, forest surrounded country house in Maine with their two children Ellie (Jeté Laurence) and Gage (Lucas Lavoie). In the forest is a spooky pet cemetery and the locals indulge in some weird ritual when burying their dead pets! Local man Jud (John Lithgow) tells Louis its all part of an ancient Indian mystical legend and when Ellie's beloved cat dies Jud tells Louis that there's a way of resurrecting the cat. Yes, and Louis, a doctor, buys this pretty quickly and the story rapidly escalates, after a tragedy, into Louis deciding he can return people from the dead. All totally daft with massive areas left unexplored including the strange pagan ritual practised by the locals and Rachel's backstory with her sister. Admittedly we get to see a lot of this bit but it never seems to fit into the narrative properly and is almost as if there's two films going on at the same time. Either way this turns into a malevolent child story, there's nothing remotely original here and apart from a bit of body horror thrown in periodically there's nothing very impactive (evil family cat just isn't a worry, it could have been despatched pretty quickly). Very disappointing

Hope you like Stephen King - Pet Sematary review by KF

Low budget (no special effects, thank God) but very effective little horror story. Great acting, especially by young Jeté Laurence, and competent directing. A Stephen King story so you know what to expect. I enjoyed it.

The new Pet Sematary could have taken one of two paths in the current age of commercial horror. It could have taken the darker path trying to stage a slow and building sensation of grief, where we truly feel the loss of loved ones that we’re compelled to feel the pain of not saying goodbye, eventually leading into the gruesome. Or it could go the goofy route of jumpscares, subversions, and slasher elements more silly than sincere. Which do you think will make more money?

It’s rare that we should expect modern horror remakes to be anything less than a roller-coaster of spookiness and Pet Sematary falls right in line. The story follows the Creed family and their escape from the busier city life for a more peaceful life in the countryside that’ll be anything but. Living out in the middle of nowhere, they don’t suspect their extended backyard houses sour soil that, when the dead buried, causes corpses to rise from the grave. There are plenty of warnings for them, from a giant dam to a creepy kid burial parade to the old man harbinger Jud played well by John Lithgow. And in case that weren’t enough, there are also ghosts haunting up their home with personal spirits and warnings from the recently deceased.

But Jud figures that maybe this time will be different. He had to put his dog down the last time he tried the whole resurrection thing but, hey, maybe it was a bad dog to begin with. The father of Louis Creed (Jason Clarke) seems like a nice enough guy despite his lack of belief in the afterlife. The wife of Rachel (Amy Seimetz) seems well-meaning despite her troubled past coming back to literally haunt her. And their kids are sweet, from the chipper and inquisitive daughter to the cute toddler son. Maybe they’ll be the ones to finally break the curse of dead bodies coming back as undead killing machines.

It’s not that a story like this couldn’t effective; it’s just that the mad-dash to all the blood and frights doesn’t warrant its setup. Jud seems to spend only two scenes with the daughter Ellie and one scene with her cat to be fully convinced a zombie cat is a good idea. There’s later the death of one of the kids and it’s only after Jud’s warped reasoning that this time will be different that Louis decides to take the dead-raising plunge. All of this proceeds so briskly that the whole ordeal is somewhat laughable in the first act before becoming completely laughable in the second with lots of reaction shots and vicious stabbings.

There are some highlights of this farce. I’m proud to report that this may be some of the finest acting I’ve seen out of Jason Clarke in a motion picture, perfectly suited for shocked reactions and a tender nature. Amy Seimetz is not too shabby either for a woman genuinely disturbed but she’s so great with her little B-story of ghosts from her past terrifying her family life that she feels like she’s in a whole other horror movie. Credit should be given to Jeté Laurence as the creepy kid who gets in most of the bloody slashings and John Lithgow is so great as a creep harbinger he feels underused in this film.

Pet Sematary comes with all the bells and whistles of a standard horror template that borders on comedy. The subversion of the speeding truck is hilarious for its many fakeouts, the burial ground comes assembled with a fine mist and thunder in the background, and the ending is more worthy of awkward laughter than genuine terror. I can’t blame the film for knowing how to play to a midnight crowd but trying to stage this type of horror around loss and grief feels a little awkward for a ride we’ve been on once before.