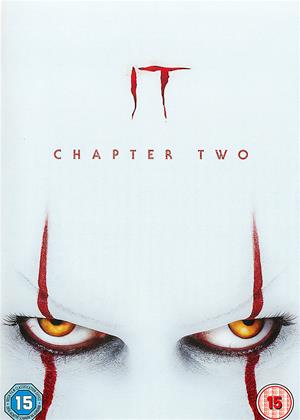 Reviews (9) of IT: Chapter Two

Looked forward to seeing the second chapter. Just a cheap horror movie that relies too much on CGI and not enough on plot. I loved the book but found myself fast forwarding till I finally quit. I'm surprised Stephen King endorsed such rubbish.

Way too long and too many CGI effects in what is a rather boring horror movie - IT: Chapter Two review by PV

I have never been a particular fan of Stephen King (the only book by him I tried to read was as overlong and dull as this movie) so maybe I am not the target audience.

But anyway, by any standard's this movie is overlong with a daft silly drawn out plot (like the first one) and I yawned through a lot of it.

To horror audiences it is probably passable but so convoluted and non-sensical even to bore them.

Chapter Two comes in at over three hours long. For what the story brings to you, the way it is paced and presented this is way too long. There is a lot of flashback padding a device that a lot of story-tellers like to use nowadays but something I feel is quite often unnecessary. The device of collecting their individual 'items' or totems to defeat Pennywise that has to be completed on their own, seems to be lifted from a video game and makes little sense other than to create horrifying scenes to scare the audience. For a supernatural killing machine Pennywise or 'It' is singularly crap at killing these individual adults who fall for his tricks every single time despite knowing what he is all about, he has no problems with other people though.

Pennywise is in fact a big problem for me. Brought to life with an enthusiastic unpleasantness by Bill Skarsgård like many movie villains he seems particularly inept in crucial moments and then deadly and all-powerful in others. In Chapter Two he is so poor at killing the protagonists who are already terrified of him, he feeds on fear, then he helps Henry Bowers, Stephen Kings stock psycho-bully, from the first film now an adult and in......shock again...a mental hospital, to escape to murder his 'Losers' enemies. Henry turns out to be dab squib, he was in the book if I remember properly and is fairly easily disposed of, I was never sure of his purpose in the story, even more so in the film. Pennywise is so cartoonish that he becomes a slightly more deadly version of Sideshow Bob but also is at poor at getting his tormentors as Sideshow Bob is. It just is not scary.

Andy Muschietti treats us to little glimpses of the films that he has liked in the past and whilst some film-loving viewers will enjoy this I personally felt it was cack-handed. In the original book Pennywise takes the form of films or popular culture figures that the kids would be terrified of, so Michael Landon's 'Teenage Werewolf' and so forth, the film-makers removed this aspect as they felt modern audiences would not get the references. Instead we get other references, not to do with the modus operandi of It that some modern viewers 'won't get'. Odd choice I think.

A running joke throughout the film is James McAvoy's Stephen King avatar, is constantly being told his stories have bad endings and he cannot write them. He's even told by Stephen King himself in another cameo yuk, yuk. The funny thing is It both in book and film form and in this incarnation rather prove the point. The ending, and in particular Pennywise's demise is poor and a letdown. From that point on the reconciliation of the 'Losers' is handled better but so many questions are swept under the carpet. People could not have forgotten which is hinted at is the power of It because It was dead. So there is a lot of destruction, death and mayhem that appears to have never really been explained.

It: Chapter Two is longer and weaker than Chapter One but is entertaining enough to watch but the real problem is the length, scope and themes of the story. This large Stephen King novel with multiple storylines, characters and time periods is really best suited for a multi-part TV series, which of course was created to reasonable effect back in 1990.

The film is okay but it's not all it.

prefer the first one - IT: Chapter Two review by cp

Thought this might be worth watching - IT: Chapter Two review by SH

Too much CGI - IT: Chapter Two review by PC

I enjoyed the first film and the relationship amongst the young cast really worked. Although they have got some good actors for the adult roles, they are swamped by CGI monsters that are not remotely scary at all. What makes It Chapter 1 so good is Pennywise, who is scary without the need for special effects on top of that. A real shame because Bill Hader and Jessica Chastain are great.

Focuses again on the same characters as the first movie but 27 years later as Pennywise the clown comes back to ravage more kids in Derry City and again turns his attentions on the losers club. A lot of the movie appears more on the characters and the past rather than the fear factor or any factor in the town of kids disappearing again. Beverly, Richie, Bill and co. don't seem to have gotten over their fear of situations years ago which Pennywise plays on, and as mentioned too long and not really any jump out of the seat moments and the climax a hurried mess of running about before finally remembering as in the first movie they need not be scared of the white faced big headed clown to finally literally bring him down - duh! Stick to the first!

Long, tedious and all round poor. - IT: Chapter Two review by ML

Honestly, just save yourself the almost 3 hours of endless CGI "scares" of monsters running towards the camera, bad script, out of place jokes and all round general tedium.

I love a slow burning film but this was just painful, i was willing it to end by the 1hr 45 mark, and there was still another 1hr to go.

It really did feel like it was knocked up quickly to cash in on the part 1 success with no real thought.

In all, just a terrible film.

IT: Chapter Two (aka IT 2) review by Mark McPherson - Cinema Paradiso

I’m not one to bash a picture for being too long; no good film is too long, no terrible film short enough. But at nearly three hours, I feel like that time should be used wisely, even if it’s based on a supremely thick novel by Stephen King. IT Chapter 2, unfortunately, spends most of that running time basking in its surreal scares than getting to know its now grown-up characters. If only it had enough faith in its strong cast to flourish instead of being overpowered by a nonstop cavalcade of nightmare tedium.

27 years have passed and its once more time for the tradition if the supernatural clown Pennywise (Bill Skarsgård) to rise from his sewer sanctum to munch on victims once more. He still goes after kids but now feasts on targets of fearful homosexuals. Such an opening appears as though it may be opening the flood gates for a new kind of story. Those hopes are dashed quickly when realizing this is mere fodder for Pennywise's rampage.

Realizing they can't run away from this ordeal, the Losers Club reassembles in Derry for one more bout of clown killing, this time do I'll ng enough homework to finish the job. The most notable of the cast is James McAvoy playing a grownup Bill who still struggles with his speech impediment and now a writers' block for ending his screenplays. He still hasn't gotten over the loss of his childhood brother Georgie from the first movie and needs some closure.

The only problem is that everyone else is in the same spot and crowd each other as they divide up individual screen time. Jessica Chastain plays a grownup Beverly who still hasn't gotten over her abusive father and finds herself in an abusive relationship. Bill Hader plays a grownup Richie who is still funny but hasn't fully come out of the closet and kinda doesn't for this film. There's just so much to do that the second becomes a monotonous string of nostalgia and scares to the point where all surprises have faded, where even a giant naked woman with nasty teeth and vomiting zombie seems mundane by the film's own standards.

It’s not that the scary scenes are poorly assembled but they lack a certain sensation of fear. This seems especially clear from the odd edits to the film that seems to have been made in post-production. After Eddie is scarred in an attack by a knife-wielding maniac, he exits the room and mutters as he gets to the door how the killer should get rid of the mullet in the modern era. Another scene with Eddie features a leper puking black goo all over him and a classic rock song has been placed over it because, I dunno, I guess it’s funnier. But even the many aspects that don’t seem like post-production comedy calls have such a reach for laughs they transform this tale into a much different film. Why does Bill try to keep kids away from streetside sewer drains when he knows full well Pennywise can strike anywhere he wants? Why do Eddie and Richie have a scary door bit during the climax that feels like its from a Laurel and Hardy movie? Why does the gang do a “check, please” joke after destroying a dining room where Pennywise’s terror strikes them all?

IT Chapter 2 comes to a clunky end by slamming in so many scenes from the novel without much genuine flow or frights. Despite the central message seeming a little more clear and a cute cameo by Stephen King, the film is ultimately an exhausting experience that never fully engages over the course of its three hours.