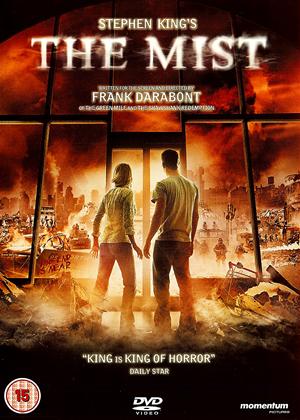 Take a chance on this - The Mist review by CP Customer

Blink and you missed the theatrical release of this film. Despite positive reviews it didn't even make my local multiplex, which is a shame given the poor horrors we constantly see.

Darabont turned down offers of an increased budget to change the ending but thankfully stuck with his vision, in what is another superb King adaptation. Strong performances from all concerned and many themes covered. Yes, there is blood and something in the mist (CGI not as bad as expected), but like Carpenter's The Fog it is never overplayed.

In many ways this is a disaster movie and asks the question what would you do? Well?

Don't go out there - The Mist review by CP Customer

A typical stephen king story. Strange creatures who attack from the mist and even starnger trapped citizens who dare to go out there.

Very entertaining and one where you could go and make a coffee and not miss anything.

This was a terrifying film with a standout performance from Marcia Gay Harden as Satan.( figuratively) by a director who seems to specialise in adaptations from Stephen King. Indeed his adaptation of "Shawshank Redemption" is currently No. 1 on the best films of all time liston the Internet Movie Database. Myself I rate his "Green Mile" even higher. Originally I was disappointed by the ending but after a bit of contemplation it makes total sense. My only major concern was what I perceived as a serious continuity error regarding bullet numbers- if explained I missed it.

The good news is that unlike "Shawshank" this one made money. So who decided to limit it's UK release when grot like "Hostel" & "Drag me to Hell" get full releases?

In the mist are creatures. Err, that's it - but enjoyable. - The Mist review by RP

Perhaps I've watched a few too many poor sci-fi 'creature' films recently, but I have to say that I quite enjoyed this one. I came across it when looking for other films directed by Frank Darabont, who also directed 'The Shawshank Redemption' and 'The Green Mile' which I had recently seen.

The story goes like this: a mysterious mist descends on a small US town, trapping a group of shoppers in a supermarket. And in the mist are creatures... Err, that's about it – the story lies in the telling of what fear (and of course, a creature or two) does to those trapped in a claustrophobic environment. The lead character (played by Thomas Jane) is a little wooden, but this is more than made up for by the character of Mrs Carmody (played by Marcia Gay Harden), a religious fanatic who is quite disturbing. The ending, unlike most Hollywood films, is downbeat, effective, and moving.

If I have criticisms it is that the film is over long (2 hours) and that some of the creature effects are poor, but most are pretty reasonable.

If you like sci-fi thrillers, give this one a go. 3/5 stars - recommended.

WORTH A LOOK - The Mist review by CP Customer

Classic Stephen King with a twist. Both myself and the wife enjoyed it and though dated it still out shines some of the stuff released in more recent years of the same genre. Worth at least one go.

WITH US OR AGAINST US - The Mist review by Frank Talker

The characterization is weak and the acting generally mediocre, but the visual emptiness of the actual mist creates decent suspense from a seemingly irrational predator - created by a Frankenstein-like scientific meddling with the purported primal forces of nature.

The characters' reaction to their predators and, more importantly, to their own fears - dominated by Marcia Gay HARDEN as a Christian fundamentalist - serves as a rather crudely-dramatized but effective allegory for the so-called War on Terror as White people battle both the unknown and each other.

One of the best Stephen King horror adaptations. - The Mist review by CP Customer

For me the Frank Darabont directed 'The Shawshank Redemption' and 'The Green Mile' are easily the two best non-horror Stephen King adaptations made, that aside I was a bit skeptical when Darabont announced he was adapting 'The Mist' for the big screen. I needn't of worried, this is easily one of the best King horror adaptations, and very clever in how the characters trapped within the supermarket have to battle with the horror lurking outside as well as the claustrophobic horror which unfolds inside as the various townspeople divide and attempt to take control of the group, and the twist in the tale at the end of the film was fantastic.

A surprise in the mist. - The Mist review by CP Customer

I have always been a fan of Stephen King books, but have, on the whole been quite disappointed by the film adaptions, with the exeption of 'The Shining' and 'Carrie'. So I was pleasantly surprised by 'The Mist'. The CGI is very good producing some terrifying moments of blood and gore. The acting is good and unsterotypically melodramatic for a Stephen King film and the ending has a twist that will leave you thinking for at least a few hours after. I would definitely recommend you watch this film if you like adventure, sci fi and interesting twists.

Can't see the mistery? - The Mist review by CP Customer

No this is about as 'tense and terrifying' as the co-op supermarket it is enacted in. We ended up fast forwarding through trying to find the scary bits but were found wanting. Silly ending too.