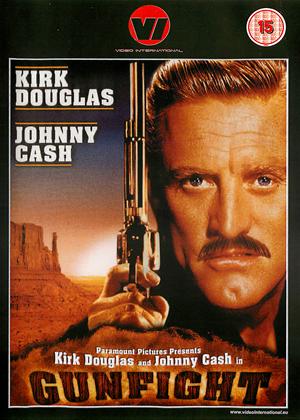 Not released
The McMasters

From a period when the western genre was just about played out, this is one of a number of films, several of them starring and/or directed by Kirk Douglas, exploring the last days of the Wild West, when most of the legends were dead, and those that weren't were embarrassing dinosaurs who had no place in the new, not-so-wild west except as aging carnival exhibits. Sam Peckinpah did it best, notably in "The Wild Bunch" and the more elegiac "Ride The High Country" (in which Randolph Scott starts the film as literally an aging carnival exhibit, complete with stuck-on Buffalo Bill beard), and of course there's Sergio Leone's "Once Upon A Time In The West", whose title says it all, a point missed by absolutely everybody who has since pinched it.

This is a very minor example of the same sub-genre. Kirk Douglas, a dependable if unsubtle actor, is a middle-aged legendary gunfighter trying to settle down, who finds that his past, combined with his lack of normal work experience, results in his having to earn a living by being paid to hang around in the saloon talking big and acting legendary - it's no spoiler to reveal that he at one point explicitly compares himself to the whores who work there too. Johnny Cash, who is really no actor at all, is oddly effective as another long-in-the-tooth legend even more alienated than Kirk; and he deserves a bonus point for not doing the predictable thing and bursting into song for no good reason.

Naturally, these two end up providing the titular gunfight. The film's basic theme - the inevitability of their acting out their appointed mythical roles and finding out who's faster - is also its biggest weakness. Two men who are basically friends agreeing to try to kill each other at an appointed time and place for a morbidly curious paying audience because it's the only way either of them can make a decent amount of money, but mainly out of sheer boredom, needs to be handled in a much more subtle way than this to really work. The major problem is that, once this idea has come up, which it does fairly early in the film, there's no real tension thereafter. We know what's going to happen, and since they don't seem to particularly care who wins, neither do we.

See the aforementioned "Ride The High Country" for a film in which a similar showdown seems to be increasingly inevitable throughout the film, but the two men involved really want to avoid it even if their old-fashioned attitudes won't let them, and the viewers care what happens to both of them. Also, you don't know how things will in fact pan out, which helps rather a lot. Here, our two potentially doomed anti-heroes trudge towards their tawdry destiny in the manner of gunfighters written by Samuel Becket. The central performances give it something, but ultimately it's a deservedly obscure curiosity which rams its message home in a tub-thumping fashion, probably because Kirk Douglas was trying to say, in this and other films he made around this time (such as the superior and much more action-packed "Posse") that the Vietnam War was a bad idea, Alas, lumpenly symbolic westerns turned out not to be the ideal way to do it.