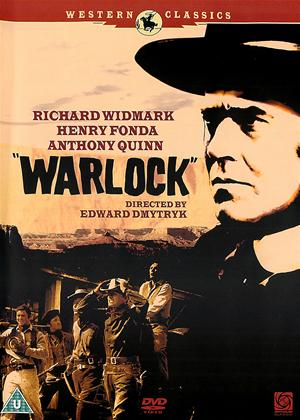 This isn't the most action-packed western ever made, though it does include sufficient gunplay to make sure we know that the looming threats hovering over the main characters throughout could erupt into real violence at any moment. Where it scores over just about every other western of the fifties is the complexity of both its psychology and its morality, which prefigures the amoral spaghetti westerns that would come along a few years later.

With the exception of one absolute scumbag of a villain, whose despicable actions motivate everything that ends up happening, no-one is entirely good or entirely bad. Townsfolk too cowardly to solve their own problems hire quasi-official lawman Henry Fonda, along with his even more dubious sidekick Anthony Quinn, a duo closely based on Wyatt Earp (whom Fonda had played earlier in his career) and Doc Holliday, to clean up their town, while pretending to disapprove of the fact that obviously people are going to get killed. Meanwhile, Richard Widmark, a good man with a shady past and, apparently, a rather low IQ, decides to do the right thing despite enormous pressure not to, gambling on the fact that most people are basically decent and will support him, and until very late in the film we have no idea how well this is going to work out for him.

Alongside this main plot, almost every major character and most of the minor ones constantly rearrange their positions like chess pieces that are allowed to switch sides, which in one way or another almost all of them do at least once. Right from the very first scene, where the western cliché of the cowardly, useless sheriff is presented in such a way that we completely sympathize with him, cardboard stereotypes we've seen in a hundred westerns are trotted out to go through their paces, and then surprise us by showing unexpected character development. Seemingly reprehensible people show their good sides, while good guys can sometimes be very nasty indeed.

Fonda is brave, decent, steely when it matters, and maybe not quite the hero he thinks he is. Widmark is frankly a bit wooden, except when events get him worked up, which fortunately happens quite a lot. But Quinn steals it as one of the weirdest characters in any fifties western, a club-footed gunfighter with an agenda all his own who is very obviously a closet homosexual, though since this is 1959 he can't possibly admit it. And DeForest Kelly, a frequent bit-player in westerns before he was forever typecast as Star Trek's Doctor McCoy, gives a bravura performance as the bad guys' cynical, slimy, and incredibly annoying court jester.

By the way, Warlock is the name of the town in which the movie takes place, and no witchcraft whatsoever is involved. I wonder how many people have rented this film in mistake for that weird horror-comedy starring Richard E. Grant?