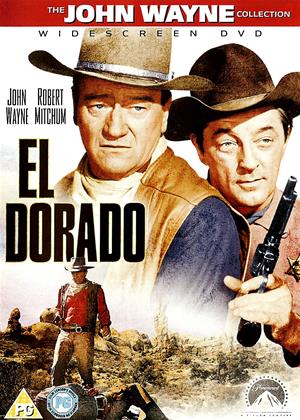 Nothing to prove - El Dorado review by RJ

Yet again I find myself sitting down to try and review a film whilst lacking the contextual framework to do so properly. At the age of 38, this is the first John Wayne film I have ever seen. Even though for the last twenty years I would easily have been able to rattle off the names of films like The Searchers, Stagecoach, True Grit, Rio Bravo etc, I've somehow never actually got around to seeing any of them. Maybe because there were always other films I was more interested in seeing, maybe because a vague awareness of Wayne's political views put me off, maybe because my exposure to the Western genre was through revisionist/spaghetti westerns and I thought that Hollywood Westerns would be too safe and conservative - for whatever reason I just never seemed to get around to them.

My overall impression of El Dorado was that it was a film made by old hands with nothing to prove - and I mean that as a compliment. I think Hawks was about 70 at the time of directing this, his penultimate film, whilst Wayne was about 60 and had been starring in films for more than three decades. The film kind of ambles along at a pace befitting men of their ages - it's slow, but not at all in the sense of being boring, just in the sense of being unhurried, knowing exactly where it is going and seeing no need to rush in getting there. It's a film that is not interested in being original (I understand that it is more or less a remake/thematic variation of Rio Bravo, and was basically remade again a few years later as Rio Lobo), instead preferring to indulge in the pleasures of a simple story told in an engaging manner.

It's actually much harder to review a simple film than a complex one. What else can I really say about this? It's an engaging story, directed and acted with such confidence and assurance as to seem effortless. To quote Roger Ebert's 1967 review: "For people who like well-made, entertaining movies with suspense, violence, horses, colorful characters, lots of shooting and a few pretty girls, "El Dorado" is about the most entertaining Western to turn up this year." I must be one of those people because I enjoyed this.

There is one cringeworthy bit of racism towards the end when Mississippi (brilliantly played by James Caan) pretends to be Chinese in order to distract a guard by putting a bowl on his head, turning up the corners of his eyes and spouting some 'Chinese sounding' gibberish. This was 1966 and American New Wave cinema was just around the corner, not that you would know it from this defiantly old-fashioned film - and it's ironic that this little bit of regressive racism is performed by Caan who is the only clue in this film to the imminent changing of the landscape (and changing of the guard) in American cinema.