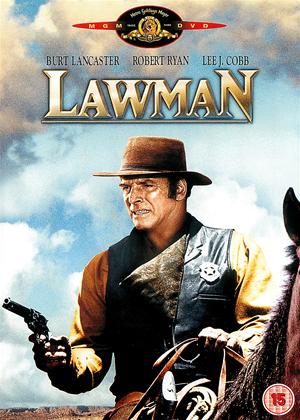 Lancaster, Ryan and Cobb says you gotta watch this one. Michael Winner suggests otherwise. Very dense with dialogue, though the dialogue is decent, but not a lot of action. Very fine period costumes and sets. Worth seeing for the stars and a good support cast.

Another loser from Winner - Lawman review by Count Otto Black

When I saw the name "Michael Winner" I thought this might be bad, but it's got a pretty impressive cast, and plot sounded promising. Unfortunately it's downright dreary. Burt Lancaster, the titular lawman, is supposed to be Judge Dredd in a stetson, and a director like Sergio Corbucci (or absolutely any other Italian making westerns in 1971) could have turned this concept into a relentlessly gripping tale of excessive revenge, culminating in a spectacular gunfight between absolutely everybody who wasn't dead yet, probably involving dynamite, while managing to make precisely the same point - taking justice too far is sometimes worse than doing nothing at all, even if you're technically right. Michael Winner, not so much. If this is "action-packed" then so is "On Golden Pond"! "Angst-packed" more like. The very occasional gunplay is listless, the overall pace is leaden, and the inevitable final showdown is both nihilistic and dull.

Everybody looks miserable nearly all the time, except Robert Duvall, who looks roguishly cheerful because he usually does, unless told not to by a director who isn't asleep. Burt Lancaster, who always benefited from good direction, simply looks constipated. Character motivation is often opaque. The lawman seems to have no reason to mercilessly hunt down a group of men, all but one of whom are innocent, when everybody else is willing to compromise, beyond the fact that he's a stubborn badass. This is discussed endlessly by everybody, but all they succeed in doing is making each other even more angst-ridden. It's got a cast who pull it up to two stars, but some of them are wasted. Robert Ryan appears to have been told to play exactly the same character he did in "The Wild Bunch" in order to persuade the viewers they're watching something similar. Unsurprisingly, he does not succeed in doing this. Don't bother.