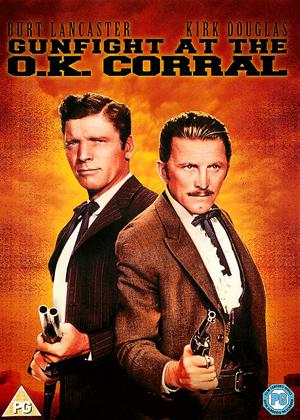 Reviews (1) of Gunfight at the O.K. Corral

The Good, The Bad, & The Interesting - Gunfight at the O.K. Corral review by Count Otto Black

From its very first seconds, as the opening bars of Frankie Laine's gloriously sincere but rather silly theme-song ring out over the title, this movie is trying to be the ultimate epic western. It comes fairly close to succeeding, but there are two massive obstacles in its way. The first is the problem of constructing a two-hour narrative leading up to a 30-second shootout between four lawmen and five baddies, two of whom ran away. As climaxes go, that one isn't very epic, so of course the famous gunfight has to be spun out, and the not exactly overwhelming odds against the heroes increased by including people who weren't really there, but it's still a bit anticlimactic.

Interestingly, not only did director John Sturges learn a lesson from this when he made "The Magnificent Seven" in 1960, in which the gunfight everything leads up to is absolutely massive, but when he revisited the legend of Wyatt Earp in 1967's underrated "Hour Of The Gun", he made precisely the opposite of this film, starting with a historically accurate and therefore not terribly impressive depiction of the famous gunfight, and spending the rest of the movie exploring the increasingly bloody long-term consequences, and the transformation of Wyatt Earp from righteous marshall into merciless vigilante.

Which leads us to the other problem with this film. Wyatt Earp is the hero, so of course he has to be so squeaky-clean that other characters repeatedly comment on it, and he only becomes ruthless enough to go head-to-head with his foes after the cowardly murder of his brother James (who in reality had nothing to do with the famous gunfight and died of natural causes 44 years later). Burt Lancaster was a fine actor, but his good looks and square jaw got him typecast as boringly perfect heroes when he was far better at playing people who were extremely flawed or downright horrible - see "The Sweet Smell Of Success" for the ultimate example! Therefore the hero of this movie is a cardboard stereotype so holier-than-thou it's impossible to care about him, let alone like him. Even worse, it means there are way too many slow bits before he finally does what a man's gotta do.

Fortunately Kirk Douglas is around to steal every scene he's in as Doc Holliday, which he does, to an extent that makes you wish the film had been almost entirely about him with Wyatt Earp as a supporting character. In the sixties, when Lee Van Cleef was finally a star instead of getting bit-parts as villainous cannon-fodder in westerns (including this one), Doc would have been the hero, and Wyatt's hopelessly naïve attempts to uphold the law without a gun would have gotten him killed inside ten minutes. And frankly it would have been a better movie. By the way, before he was a Starfleet medic, DeForest Kelley always played tough guys in westerns. One time he even got killed by John Wayne. Here he has the small rôle of Morgan Earp, making him the only actor to have fought on both sides of The Gunfight At The OK Corral. And, thanks to some kind of Trekkie miracle, he won both times.