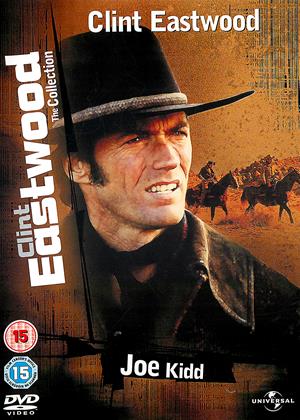 Synopsis:
Waking up in the local jail after a night of hard drinking, gunslinger Joe Kidd (Clint Eastwood) is not at his best as he comes before the judge to be reprimanded. But he soon finds himself caught in the middle of a dispute between some land workers and land barons and must decide which of them has right on their side. Although the answer is far from clear, his choice will be instrumental in deciding the outcome.
Actors:
Clint Eastwood, Robert Duvall, John Saxon, Don Stroud, Stella Garcia, James Wainwright, Paul Koslo, Gregory Walcott, Dick Van Patten, Lynne Marta, John Carter, Pepe Hern, Joaquín Martínez, Ron Soble, Pepe Callahan, Clint Ritchie, Gil Barreto, Ed Deemer, Maria Val, Chuck Hayward
Directors:
John Sturges
Producers:
Sidney Beckerman
Writers:
Elmore Leonard
Studio:
Universal Pictures
Genres:
Action & Adventure, Classics

This mediocre Clint Eastwood vehicle is one of his most obscure early films, and rightly so. It's not as exciting as the "Dollars" trilogy, "Dirty Harry", "Hang 'Em High", or even "Coogan's Bluff", and it doesn't make the slightest attempt to transcend his default tough-guy persona like "Play Misty For Me" or "The Beguiled". Basically it's a potboiler about a gunslinger so indistinguishable from an older and tireder Man With No Name (who is actually called Joe in "A Fistful Of Dollars") that for the first half-hour he dresses as though he stocks his wardrobe by raiding Stan Laurel's dustbin, for no discernible reason other than to convince the audience that Joe Kidd isn't that bloke in the poncho but some other fellow with a different hat and everything.

Of course, no film in which a young Clint Eastwood, looking so much like Hugh Jackman that you keep expecting him to throw away his gun and sprout knives from his knuckles, saves the day by being the toughest hombre in town can be a dead loss, but this one comes close. Many of the cast phone in performances as two-dimensional as their characters, and Eastwood is so unengaged that only for one brief moment very near the end does he manifest the mean ferocity he should have had all along. In some scenes he looks so weary that I checked to see if there were any problems which might have affected his performance, and I wasn't surprised to find that during the production he caught bronchitis and was so run down he was having panic attacks on set.

It doesn't help that the script is clunkier than a ton of bricks. Joe Kidd might almost be trapped in a retro version of "The Truman Show", since everyone and everything in his environment seems to exist for the sole purpose of motivating or facilitating his actions, often in very contrived ways. This is of course true of all movies, but a good script camouflages the puppet strings. This is not a good script. It shoves right-on early seventies politics of the "greedy white Capitalists bad, vaguely Marxist Mexicans good" variety down our throats while the most interesting idea in the film, that the legendary champion of the downtrodden peons' rights (John Saxon in politically incorrect brown makeup) is actually a cowardly selfish creep with a massive ego, is casually thrown away and the character becomes a lifeless McGuffin who might as well have been a holy statue or a chest of gold.

There's one extremely memorable incident involving a train (Clint Eastwood obviously remembered it, because he did it again a few years later in another of his lesser movies, "The Gauntlet"), but it's so daft it feels as though it should be in a different film, possibly called "Carry On Up The Unforgiven", and anyway, the number of "good bits" in a feature-length movie should ideally be greater than one. It passes the time, but it's one of Clint's most forgettable outings, and I'd have given it the 50% it deserves if two and a half stars was a possible rating on this poorly designed site. I'm only awarding it three stars rather than two because Clint deserves a pat on the back for managing to give any kind of performance when he should have been tucked up in bed until he was all better.