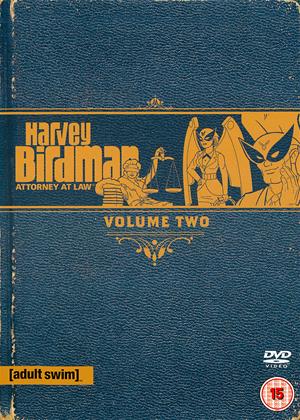 Synopsis:
Yeah, like it was that show about the guy who was a superhero and then he got some different job or something?! On "Adult Swarm" on the Cartoon Channel!! And like, I heard that Astro gets attacked by wild dogs! OMG! LOL! EMOTICON! Yes. Yes, it is. That show, not that channel. And this is that show's video. Correction: Its second video. But, you'll be happy to know, the first's still being heavily pirated in China. So why not do your duty and snag this one good and fast - if only to see whether that rumored single frame of a naked Birdgirl is actually true? Unless you're planning a trip to China sometime soon, then, well, we'd recommend just holdin' off. Enjoy!
Directors:
Richard Ferguson-Hull
Producers:
Evan Adler
Voiced By:
Gary Cole, Thomas Allen, Stephen Colbert, John Michael Higgins, Maurice LaMarche, Bill Farmer, Chris Edgerly, Debi Mae West, Joseph Seal, Grey Griffin, Patience Cleveland, Neil Ross, Wally Wingert, Diane Michelle, Tom Kenny, Gary Anthony, Greg Fountain, Phil LaMarr, Fred Tatasciore
Creators:
Michael Ouweleen, Erik Richter
Writers:
Michael Ouweleen, Erik Richter, William Hanna, Joseph Barbera, Steve Patrick, Jeffrey G. Olsen, Chris 'Casper' Kelly
Studio:
Revolver
Genres:
TV Animated Comedies, TV Comedies, TV Sci-Fi & Fantasy

Rent other films like Harvey Birdman, Attorney at Law: Vol.2

Sign up
Futurama: The Beast with a Billion Backs

Sign up
Talladega Nights: The Ballad of Ricky Bobby

This second set of Harvey Birdman episodes, this one spanning parts of seasons 2 and 3 really showcase when the satire hit its groove. By this point in the series, there’d already been a number of running gags and personalities for the show to be more than just random joke vehicles. The likes of X constantly rolling his Rs in his quest for the crrrrrest and Peter Potomus’s constant questions of that thing he sent ya become great gags that only get delivered faster and with more cleverness. The writing also holds up for episodes that both play with the HB library and tap into current themes.

Consider the first episode, "Back to the Present", which finds the Jetson family traveling back in time to sue Earth for the rising sea levels. There’s plenty of environmental jokes as much as there are great bits about the Jetson’s dated future seeming so...dated by comparison. "Blackwatch Plaid" is more interesting on a technical level as an episode that reuses the old animation style of ink-and-paint to portray a story of ridiculously increased security in the office (commenting on post-911 society). "Grape Juiced" uses Grape Ape for some easy testicle jokes on him being a drugged-up athlete.

There also a number of episodes that focus less on court cases and more just on the characters. "Peanut Puberty" takes the idea of superheroes fighting villains being akin to coming of age with puberty, associating shooting rays with masturbation and so on. "Gone Efficien...t" finds Harvey being pushed to his limit in an overly efficient workplace, making great use of the snappy Flash animation. "Guitar Control", uniquely timed to air during the night of the 2004 Presidential election, features Phil running for office while being supported by the guitar lobby, as guitars are deemed far more dangerous when the likes of Quick Draw McGraw is wielding them.

The start of Season 3 begins with perhaps one of the most sexual episodes of the show, "Booty Noir". The episode finds the shrinking-obsessed villain of Reducto becoming obsessed with a big-bootied woman so much so that he finds himself willing to make the butt bigger for his own fetish. The whole episode is posed in a sensual manner with Phil Sebben reading seductive poetry in between acts.

"Harvey's Civvy" is one of the most hilarious episodes of the series for having all of Harvey’s former villains suing him for damages that occurred during their villainous plans. This episode also has a great nemesis for the cocky Mentok with the mind-altering Shado playing psychic games in a battle of the mind-takers.

Finally, there’s the episode that introduces the last original character of Birdgirl, a paralegal intern who is Phil’s daughter. Much like the rest of the characters, she has her own hilarious gimmick of making Birdgirl separate from her true identity of Judy, daughter of Phil Seben. This leads to a slew of secret identity gags where Phil constantly wants to marry Birdgirl in a series of incestuous bits.

The bottom line is that Harvey Birdman was able to not only maintain its quality of snappy and witty animation but improve upon it as well. It remained one of the most fast-paced and satirical cartoons on the Adult Swim block for quite some time. And considering by this time Space Ghost and Sealab 2021 had pretty much been canceled, it really was the last great Adult Swim HB satire.