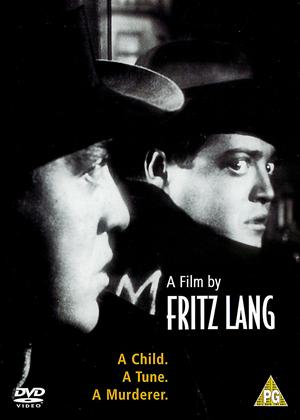 It isn’t often a villain immediately invites the vitriol of the audience than a child murderer, or even more importantly, a sex offender. Director Fritz Lang intended this film as a stark warning against child neglect (as the very last few lines underline). The very lengthy meetings and discussions as to how the murderer be apprehended are enlivened somewhat by the challenge that characters have of actually seeing one another amidst the fog of all pervading cigar and pipe smoke. The acting is solid throughout, if theatrical in a manner typical of this period of film making. Talking pictures were very much in their infancy here and so the style of acting is highly visual – this is no complaint: the extravagant gestures enhance the atmosphere much as they did in the early sound Universal pictures. It has to be said that the performances here are even slightly restrained (if that is the right word) compared to others of this era.

And yet Peter Lorre, in his first major role, creates a true presence amongst all this, which is vital to the effectiveness of the story after the weight of expectation placed upon his character Hans Beckert. His reputation is discussed at length, and the first few glimpses we get of him are silent. Wide eyed and unassuming, this little man seems far from the monster we have been lead to believe he is. His mannerisms of jumpy neurosis and excitement upon spying children – especially young girls – going about their business are bravely portrayed given the subject matter, and in no time, we believe in him thoroughly.

Fritz Lang names this as his favourite of all his films, and it is easy to see why. The direction is inventive and almost surreal in places, inviting us fleetingly in to Beckert’s world: a parade of photographs of his victims snatched away from our view to reveal the sea of scowling faces of Beckert’s unelected jury; the revelation of the balloon Beckert bought for one of his young victims taking centre stage as he backs fearfully away from the incriminating toy; unusual viewpoints and distant camera work during the chase towards the end. Finally, Beckert’s crumbling admission and cries of ‘I can’t help it!’ A broken man guilty of the most heinous crime, viewed by a band of vigilantes impassively observing his meltdown. It is strong stuff of course, and caused the expected controversy at the time and since, but we take a long time to get to this point. A lot of time – rather too much for my enjoyment – is spent with other, lesser characters and their endless plans to capture the miscreant. At nearly two hours, it is too long – hardly surprising that an edited version (running at 98 minutes) was released in 1960. Yet what we have here is nevertheless a ground-breaking film, stunningly directed with a flourish that would prove inspirational for years to come, and a barnstorming central performance so strong that Lorre had cause to resent the subsequent type-casting that resulted.

Metropolis may attract all the attention but M is a masterful film that was originally banned for decades. The restoration here is a tremendous job, pulling additional scenes from other prints to assemble the nearest thing we have to a complete version. However it still remains a few minutes short and you can see where some gaps exists. Yet this doesn't spoil your enjoyment with Peter Lorre never better and Lang's inventive use of reflections, compositions and sound, always proving memorable.