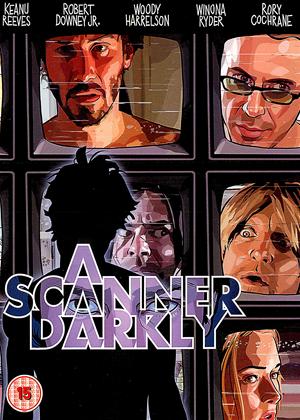 Reviews (4) of A Scanner Darkly

Looks great but that's it! - A Scanner Darkly review by CP Customer

A fantstic film to look at, A Scanner Darkly looks like traditional animation, CGI and real life action all rolled into one. Unfortunately, the film is not well put together; it is slow paced, confusing and difficult to follow. There are some funny moments, but my overall impression from watching the film was of boredom. A shame, as the Philip K Dick novel, which I haven't read, sounds fascinating.

As rubber ducky said the film looks great, a nice edgy graphic novel appearence. But film is confusing and a little muddled to say the least. Which is a shame as the film gives us great performances especially Winona Ryder, who I never really rated as an actress, but this film shows she has some genuine talent. Backing her up we have Robert Downey Jr, giving a fine comic performance as a somewhat bemused friend of Keanu and Woody Harrelson's characters, is he friend or informer?

Woody alas is at times annoyingly OTT whilst Reaves proves he isn't always as wooden as he can be in other movies. But this is a mixed package, looks great but may need more than one viewing to make it clear what's going on. It's always an ambitious thing to do, adapting a Philip K. Dick story, and it's been done before and well. Blade Runner for one but this is a valiant attempt but falls a little short. The extra features may help to clear things up somewhat, so watch the extra features, it may help understand the plot.

Philip K. Dick is rotoscoped (the film is digitally processed to give the effect of animation) in a paranoid, dystopian conspiracy thriller featuring Woody Harrelson, Keanu Reeves and Robert Downey as drug damaged drop outs! Only, Reeves is a cop, and every day he puts on a scramble suit to go to work! Can be watched sober.

Pretty bizarre. The storyline was probably not worth the the amount of work in the animation. But it was well done and a pleasure to see "adult" animation instead of cute elephants and google-eyed cats.