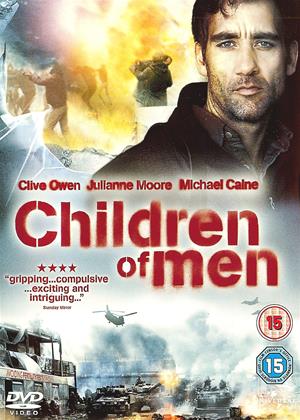 Reviews (7) of Children of Men

Set in a time in the near future when humans have become sterile and therfore face extinction. It is a bleak and depressing story based on PD James excellent novel, but also offers a ray of hope. The scenes set in the immigrant detention centres are scary and frighteningly reminiscent of Nazi concentration camps. I found them difficult to watch. I am not a Clive Owen fan but must grudgingly admit that he does quite a good job as Theo. Michael Caine as his hippy father adds a light hearted touch and Julianne Moore is good as Theo's militant ex-wife.

Think I saw an earlier film years ago that had something of the central idea. Interesting development of some of the characters, but story line can drag at times. Ending leaves much of it in the air as to what future mankind can have. A film to watch because it is different and not always predictable. NOT one for the laughs though! Pessimistic outlook.

Although really looking forward to watching this after seeing the trailer I found myself just a little disappointed. The storyline drags and some of the acting is of Eastenders quality. The cinematography was great and there's no doubt that technically this film is pretty impressive but with an idea that could've been a real blockbuster the makers of this film failed to reach their potential.

Its not all bad though, Clive Owen does a great job and some scenes are really very moving.

Its worth watching if only to explore the concept of an infertile human race - beyond that it leaves a lot to be desired.

There's really no other way to describe this movie than 'mesmerising'. It's fast, well-acted, brilliantly realised, and most of all, totally and completely plausible. There are two tracking shots--one of five minutes and the other of ten--that are absolutely beyond anything in cinemas these days. Technical achievement and directorial achievement are supreme here. Highly recommended.

This is a good film and I enjoyed watching it but, let's face it, it is not as good as most reviewers have said over the years, and it is not as profound as most people seem to think. The storyline is actually quite simplistic: Britain in 2027 (in a few years' time, that is: brace yourselves, folks!) has turned into a Fascistic state where anti-immigrant policies are enforced by the Army; civilisation is collapsing as worldwide infertility has hit women. It is an interesting premise, but the movie somehow fails to live up to its stated purpose. In passing, it is interesting to note that the future of humanity is embodied in a black woman speaking with an African accent (the actress, whose acting is good overall, in fact, is British, of Ghanaian origin): the sub-text on the terminal decline of the West is obvious, as London is shown to be a filthy, violence-ridden urban jungle.

First of all, it looks a bit cheap at times (and yet, the budget was considerable): it is just the way it is filmed; it somehow looks like a low-budget movie, to me. Second, the characters lack any sort of genuine depth and some details are baffling or preposterous. Can you imagine an American movie of this kind where the lead male actor ends up with his feet in a bucket of warm water on more than one occasion because he has footwear-related issues, and, for a prolonged part of the film, is actually wearing flip-flops. Yes, flip-flops. Only a film set in Britain could come up with such an idea, quite frankly. The alternative would have been sandals, obviously. Third, the dialogues are not particularly inventive or memorable, much of the time: 'Terminator' films have more humour to offer than this film, which rather takes itself seriously, in fact.

My problem is also Clive Owen. He seems to be a likeable person (I have no idea whether he is in real life). But every character he plays, from what I have seen over the years, is the same (and whether he is playing himself, as a person, or not!): someone who is cynical, blasé, depressed (hence depressing), pessimistic, gloomy, dishevelled, and who has basically given up on fellow human beings and life. Then, something happens in the story whereby he decides to rise up to the occasion and do The Right Thing. But he is still, right through, depressed, gloomy, dishevelled and pouty. He seems to be thinking, all the time, that, really, 'Life is horrible.' (I am being polite.) In this film, his uncouth and filthy appearance reaches new depths as he staggers about in his flip-flops, lurching from one disaster to the next. It gets a bit limited and annoying after a while. It is also rather formulaic. Is the character (and C Owen's acting) capable of more than one theme/ strand of emotions/ take on life?

Having said all this, it is an interesting film and the end (the last 25 mins or so) is actually moving and good, so, I recommend the movie. And of course, Michael Caine, in his minor part as an ageing hippie living in the woods, is excellent, as he always is.

A stunning and really compelling thriller set in a dystopian 2027 UK. The world's societies are collapsing and, for reasons unexplained, the human race has become infertile with no babies having been born in eighteen years. The UK has become an extreme right wing controlled country with forced deportations. Theo (Clive Owen) is a lowly Government clerk, cynical and trying to keep a low profile when he is approached by his ex wife (Julianne Moore), now the leader of a subversive group proscribed as terrorists by the Government. She wants him to help a young woman Kee (Clare-Hope Ashley) to escape to the coast where she will be taken to a sanctuary. Theo is reluctant until Kee's secret is revealed to him. But soon he begins to mistrust the group that claim to be on their side. Portraying a bleak and grimy environment with toned down colour and with an exceptional support cast (Michael Caine, Danny Huston, Chitwel Ejiofor, Peter Mullan, Charlie Hunnam and Pam Ferris) this is a superb film, a fantastic story, littered throughout with religious imagery, which, whilst set in the near future, doesn't attempt to be a sci-fi story, it's a human drama narrative that is very well written and excellently directed. This is one of those films where you can see hints of what society may become but it's also a story of hope. A film that I cannot recommend enough, it's simply topnotch.

Worth watching I found this interesting not sure if I like it or not. I found the cast list on the disc paper cover odd as it has Nihal Anathnayake (apologies if I have spelt his surname wrongly) who is currently a presenter on radio five live. He has a miniscule part as a Radio announcer. Michael Caine on the sleeve notes would encourage more people to watch this. He has a good role in the film.

Alfonso Cuaron is, undoubtedly, a director with a special touch. His movies have that distinctive note that you can immediately recognize and loudly exclaim his involvement in the work, regardless if the work itself allows such praise or hides it. Children of Men does not hide anything; in fact, this film puts, inarguably, one of the greatest working directors of the 21st century in full display, including all his camera angles, choice of a cinematographer (the equally great Emmanuel Lubezki who later went on to work on ‘The Revenant’), and the infamous long takes which are pieces of art in and of themselves – like short stories waiting to become parts of a whole.

The film follows Theo (in Clive Owen’s best role till date, on par or better with Croupier), as he tries to make sense of the word around him which has undoubtedly gone to shite. In this truly post-apocalyptic world, females have somehow become infertile, and thus the sole survival of the human race has been put at stake. Meanwhile, only Britain had remained the only “viable” state, using an authoritarian rule and going back to politics such as deporting illegal immigrants, introducing constant curfews, and waging a physical and war of propaganda with its citizens. In this very likely scenario, Britain, in the word of the film, “soldiers on”.

It would be rather unfair to give a criticism of this film in 500 words or less, because that would mean to undermine (and overlook) several aspects of the film without even having the guts to talk about current political affairs. And that would be equal parts dishonest, as well as heavily unprofessional. But I digress.

Okay, now let’s talk about the technicalities that make Children of Men such a great film. First on the list: the cinematography, which is breathtakingly eerie, beautiful, and the best in the world credit to Emmanuel Lubezki.

Next on the list: the long takes. There are several in the film, of which the most prominent two + a half are as follows: Car One, Car Two, and Battle One. Car One is the scene where Theo (and group) try to escape the clutches of the resistance (or what’s its name) while going downhill. The most intense long-take scene in the whole history of cinema. Car Two (by reverse chronological order) is the scene where a certain character dies; this scene lasts about eight minutes and director Cuaron admits that he cheated a little whilst putting it together. Nonetheless, this scene is the most thrilling long-take in the history of cinema.

Finally, let’s talk about Battle One. This take of a scene happens in the third and final act of the film, where the stakes are as high as it can get. The final confrontation between the dissidents and the state of Britain happens around Theo, while he struggles to escape with a valuable payload in his hand. Will Theo succeed? Who will prevail, the dissidents, or the oppressive, authoritative state of Britain?

That remains on you, the viewer, to find out.