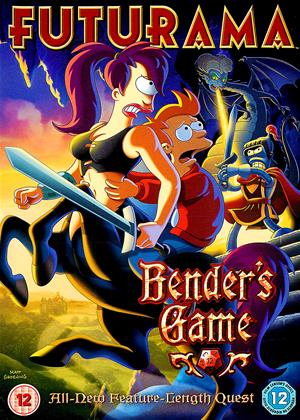 Doesn't quite work as a feature. - Futurama: Bender's Game review by CP Customer

I'm a big fan of Futurama, the previous four seasons before FOX cancelled the show were in my mind every bit as good as the Simpsons. While it's superb to have Futurama back, as a 85 minute single story feature length episode it doesn't quite work and lacks the pace and spark of the regular 22 minute shows.

After the disaster that was The Beast With a Billion Backs, Bender’s Game was just the palette cleanser needed. As the third Futurama feature, this film is an unapologetic RPG, D&D, Lord of the Rings-style fantasy. There’s some weird logic to how the characters have been placed in such a scenario but all you really need to know is that it’s an excuse to place Futurama in a fantasy setting. And it’s pretty damn funny for being little more than that.

The initial setup of Bender letting his imagination run wild is a strong start for the film. He witnesses the kids playing Dungeons and Dragons but can’t join in since his imagination is not very present. He tries his best, however, and creates the character of Titanius Anglesmith, a knight. However, Bender lets his fantasy get carried away and is halled off to the robot institute. Bender’s imagination, however, merges with the central plot involving dark matter, and the Planet Express crew and all of New New York are transported into his world. With everyone getting amnesia upon entry except for Fry and Leela, it’s up to the couple to save everyone from an eternity of a fantasy world.

Fry is now a hobbit and Leela a centaur, leading to a plethora of strong visual gags and referential humor. Professor Farnsworth is obviously a wizard and Amy is now the queen of water nymphs. In case it wasn’t clear by the staging, there’s a lot of parodies straight out of Lord of the Rings, made most evident by the characters having such names as Frydo and Momon.

I think I loved this film so much more than Beast With a Billion Backs because that story at the place isn’t that dense. It’s a standard scenario of being whisked away to another dimension and finding your way back home. As I said, it’s mostly just a slew of subversive and sly gags on the theme. Some of them are rather on the nose, as with the location of Wipe Castle being an easy dig at the fast-food chain, but still managed to make me crack a smile.

There is, however, one unique development that gives the film just enough heart. Professor Farnsworth learns amid the fantasy world that Mom’s son of Igner is also his own son. This doesn’t just feel like a cheap twist either and actually gives some emotion to the usually grumpy cipher of exposition that is Farnsworth. This emotional realization plays into the climax that brings about a rather heartfelt finale.

For being little more than the Futurama Dungeons & Dragons episode, Bender’s Game manages to showcase the hallmarks of what makes Futurama so hilarious. There’s a divergence from the typical relationship issues that Fry faced in the first two films, favoring other characters and making the ultimate message of the film far less troubling. Among the four Futurama films, this entry is one of the best.