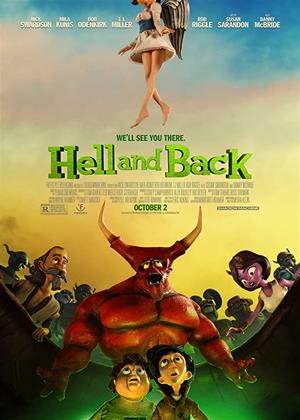 Sign up
Lego Hero Factory: Rise of the Rookies

Reviews of Hell and Back

Hell and Back review by Mark McPherson - Cinema Paradiso

In the medium of animation, there exists a sad little section known as counter-culture raunch. These are movies and shorts that seek to challenge the notion of animation only being for families, but only by transforming them into immature comedies of the dude-bro variety. As such, they are almost entirely built around the premise that it is edgy and amusing that animated characters could utter curse words, kill each other and have sex. In short, they hold animation back as being the stereotype they so desperately strive against - perpetuating the notion that animation is only for children and immature adults.

Hell and Back is yet another addition to the pile. It doesn't seek to have a message, a plot or character development. All it wants to do is dance around hell and draw out jokes about weed and rape until it's depleted any hope of being comedic. Remy (Nick Swardson) and Augie (T.J. Miller) are too 20-somethings wasting their lives away while working at a failing boardwalk carnival. They discover a book from hell and think it would make for a killer attraction. Thinking nothing of goofing around with the mystic writings, they place a curse on their co-worker Curt, who is sucked through a portal to hell. Remy and Augie both venture into hell to save Curt because...well, there wouldn't be any movie if they didn't.

The underworld is run by a conflicted Satan (Bob Odenkirk) that tries to appear as a dark ruler in front of his demons, but turns into a meek artist of lesser qualities in secret. I'm not exactly sure how we're supposed to feel about this character. He rarely does anything that evil aside from ripping the head off a demon now and then. His strange relationship with the reluctant angel Barb (Susan Sarandon) leaves him in a bit of a dilemma that is never resolved. Between him being the dark antagonist and the artistic loser struggling to reach out, the movie never really does much with him outside of laugh at his shortcomings. What good is a villain if you can't fear or hate him? And why would you waste the wonderful Bob Odenkirk on such a muddled character.

The gags are unbearably dragged out to the point of being disgustingly monotonous. Sex jokes are popped in at random with every character, but the character of Orpheus (Danny McBride) overdoes these bits by talking about incest and sex to an awful degree. It finally hits the floor of laziness when Orpheus and Barb break into a song with the lyrics literally being about penises going into vaginas. They couldn't find any funny words to use besides penis and vagina? Even on the level of immature humor, the picture still feels lazy with its refusal to provide twists on its base humor. When a drawn-out joke about childhood male rape is only funny in how it depicts childhood male rape, I additionally wondered if there was something seriously disturbed with these writers.

There is one decent reoccurring gag in which an annoyed lost soul is given first-world problems as his torture in hell. This includes sitting in a baby seat and not being able to order pizza from a Pizza Hut/Taco Bell. The dialogue in these little segments are actually rather amusing and timed just long enough. You could stitch these segments together and have a charmingly clever series of animated shorts. The filmmakers realize this as well with additional scenes of the annoyed soul in the credit roll.

The stop-motion animation was provided by ShadowMachine, the same studio responsible for the late-night animated skit show Robot Chicken. The quality is slightly above their usual TV standards with better models and more elaborate sets. And, yet, it still feels stilted the way there are few visual gags present. You'd think for taking place in hell that the animators could run a little more wild with ideas, especially for their first feature film to showcase their talents. And as an R-rated stop-motion production, why not go all the way with more gore and sex instead of talking about it like kids in a schoolyard? It might not be that creative, but it would at least prove that the filmmakers are giving their all.

Hell and Back needs to go back to the drawing board and find something more clever in its tiresome pastiche of demonic hi-jinks. Why does a movie about hell, the devil's conflicting relationships, the strange mind of Orpheus and the power of demonic curses have to be so dull? Maybe the writers should have focused more on character and a little less on how to force in gags about weed and rape.