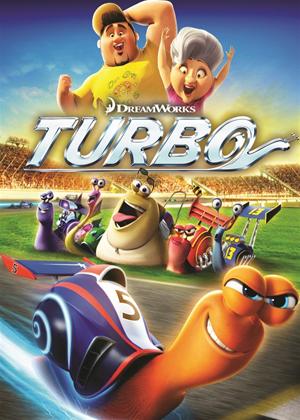 With a tagline like: “He’s fast. They’re furious” I couldn’t help but expect great things from Dreamwork’s latest offering Turbo. And Disney’s biggest animation rivals did not disappoint.

An adorable little story about Turbo the garden snail whose dream is to race in the famous Indy 500, one of the most well known races in American National speed racing, and though his dream seems impossible Turbo remains determined. A freak accident fuels his shell with nitrous oxide, finally giving him the speed he so craves and thanks to an unlikely partnership with the loveable son of a failing Taco Restaurant owner it seems as though Turbo’s dreams are about to come true.

A wonderful, colourful and imaginative piece Turbo is fun all round; the contrast and similarities between the two snail brothers, Turbo (voiced by Ryan Reynolds) and Chet (Paul Giamatti) and the Hispanic Restaurateurs Tito (Michael Pena) and Angelo (Luis Guzman) is both charming and entertaining, whilst the host of supporting characters – all portrayed by an excellent, if somewhat eclectic, voice cast (that includes everyone from Samuel L. Jackson and Snoop Dogg to Bill Hader and Ken Jeong) – are simply perfect. Throw in a healthy dose of child and adult friendly humour and once again it appears that the kid’s blockbuster speeds ahead of its rivals.