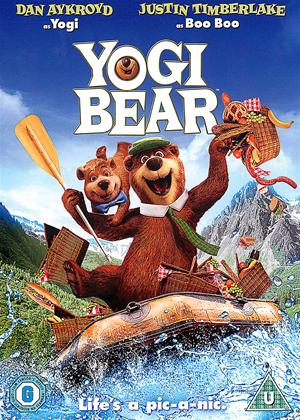 Hanna-Barbera’s 2-D cartoon classic gets its live-action 3-D treatment in ‘Yogi Bear’. Yogi (voiced by Dan Aykroyd) and his sidekick Boo Boo (voiced by Justin Timberlake) are Jellystone Park’s resident bears… and pic-a-nic basket stealers. They can’t help themselves; they’re just too lazy and smart to find food in the woods. What best way to get some grub than go down the park and shop some chow off unsuspecting humans. Their ‘skills’ aren’t really appreciated by Park Ranger Smith and he wants to be rid of them. But how can you get rid of an all-too-smart bear and his loyal sidekick?

‘Yogi Bear’ is a kid-friendly movie with a message for people to be more eco-friendly than greedy. As it turns out, Jellystone Park will have to be turned into real estate and when there’s no more park, there’ll be no more woods, and that would be a disaster not just for Mother Earth but most especially for Yogi and Boo Boo – think about all the pic-a-nic baskets they won’t get to steal when that happens!

As a classic TV cartoon, ‘Yogi Bear’ works wonders at inciting belly laughs in such short bursts. Yogi and Boo Boo were introduced in the 60’s, a totally different time then, and to update it in the 2000’s seems suspect. But the movie version sticks to its original antics and somewhat manages to make it relevant with the bulldozing of Jellystone Park by its villain, corrupt Mayor Brown, for economic gain but to the detriment of the environment.

Although funny, ‘Yogi Bear’ is not a laugh-out-loud movie. The kids would love it, adults with short attention span would too, but the jokes and gags are most times uninspired and trite. The CGI-rendering of Yogi and Boo Boo are stellar but it does take away the 2-D characters’ charm. Although we’ve had great feats in CGI animation and 3-D formatting, its proliferation in cinema saturates the market. You’ve seen a CGI, 3-D movie you’ve practically seen it all. ‘Yogi Bear’ is an unnecessary yet okay remake at not-so beloved cartoon characters