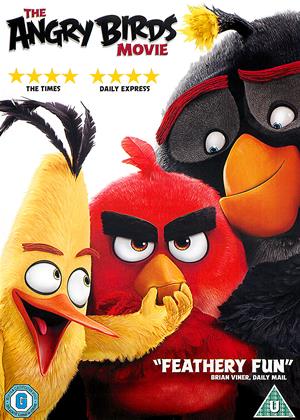 Reviews of The Angry Birds Movie

When I joke with others about animated movies created for the sole purpose of selling toys and little else, this is the type of movie I’m talking about. There have been so many golden animated movies of the past decade that I’d like to believe this type of formula died off in the 1980’s. But here we are with a movie based on a video game that is so commercial and ill-written that it is destined to be looked back on by this generation as another cheesy blip in the history of video games turned movies.

I’ve heard it time and time again since I was a kid: “This video game would make a great movie.” Usually whenever these words are uttered, it pertains to the narrative at play in the game. I doubt anybody had such a desire to see Angry Birds transferred into 90 minute narrative. No, wait, the marketers at Sony did based on the popularity and money to be had. Considering how quickly a studio jumped on the prospect of an Emoji movie, it’s safe to bet that the studio leapt before they looked.

To be fair, The Angry Birds Movie starts decently on the blandly titled Bird Island. In this society of happy birds, Red (Jason Sudeikis) sticks out as the grump of the collective. He hates talking to other birds and mostly keeps to himself, sarcastically jabbing at anything that annoys him. His anger overflows enough at one point to send him into anger management class. In this class, he meets other birds dealing with their anger including the eccentric Chuck (Josh Gad) and the short-fused Bomb (Danny McBride). As Red struggles reluctantly to find something joyful in his life, the audience is treated to a barrage of bird puns and gross-out humor. Surprisingly, this type of world and character building is not too shabby. It becomes rather amusing at times to the point when I was starting to become invested in Red’s arc.

And then the movie takes a nosedive when it realizes that it’s based on a video game and that it must appease the fans. After all, the core following of fans isn’t looking for a unique story - they want to make sure it’s faithful to its non-narrative source material. Seemingly out of nowhere, a ship arrives with pigs on it from Piggy Island. They arrive on Bird Island to showcase their wondrous trade goods and claim to be explorers, but Red doesn’t trust them. He soon discovers an evil plot to steal bird eggs, but it may already be too late to save his kind from the egg-snatching pigs. What’s Red solution to get the eggs back? Smash birds into Piggy Island buildings with a giant slingshot. Why? Because that’s what you do in the video game.

The addition of the pigs is when the movie goes into a tailspin of overabundant musical numbers, poop jokes and references to Minion mannerisms that the only thing that differentiates the pigs from the Minions is the color green. Similarly with Minions, The Angry Birds Movie runs out of material in its third act and becomes a cavalcade of frenetic action without character. At that point, it’s too late to focus on some grander message of coming to terms with your anger or being mindful of strangers. These story elements become so vague that many critics have started to form conspiracy theories that Angry Birds’ plot is a metaphor for men's rights and the immigration crisis of Germany.

But don’t give the movie so much credit, implying that it was intended to be anything more than a by-the-numbers cash-grab for the kids with their love of mobile games. There’s so little thought put into any of this story that I’m surprised the writers found anything at all to this blank slate of a property. There’s a reason Pixar’s movies dominate CGI animation as they take the time to make sure the story is there before the graphics. If a story isn’t working as they go along forming it, Pixar will dump it and go back to the drawing board. I doubt Angry Birds was edited past its first draft before the animation was already being assembled.