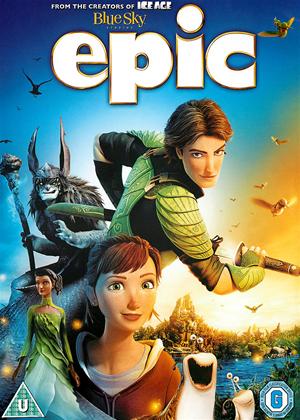 I loved this film as did the whole family and we have a mixture of ages. Funny. Emotional. Romantic but all tastefully done.

Kids will love it. Not quite as funny as Happy feet or Madagascar, or as colourful as Rio's, bit predictable but good fun for the kids.

The basic concept behind Epic, the latest animation from Blue Sky Animations, the studio behind the Ice Age saga, ensures that the action and adventures had are decidedly Epic as the film creates a magical and daunting new world by just looking a little closer at the beauty of nature and the idea that every creature, great or small, has a voice and most of all, a personality.

Epic tells the story of MK (Amanda Seyfried), a teenage girl who comes to live with her obsessive father Professor Bomba (Jason Sudeikis) after her mother dies. When MK finds herself inexplicably shrunk by a mysterious force she finds herself in a world full of tiny men and women who are fighting a war for the life of the forest, a war she finds herself stuck in the middle of as she tries to return to her father, a man she thought was crazy for believing the forest was full of tiny human creatures.

While everything plays out rather predictably, Epic is a thrill ride from start to finish as you find yourself invested in this new world, one that has supposedly been hiding under our noses all this time. This world is detailed, oddly realistic and full of life as director Chris Wedge creates a beautiful world to explore as MK finds herself on a journey to defend the forest with a ragtag group of heroes from Slug and Snail duo Mub (Aziz Anzari) and Grub (Chris O’Dowd) to young, cocky and reckless leafman Nod (Josh Hutcherson).

Like most animations, Epic has strong family overtones but its really a story of maintaining balance in nature while still maintaining your adventurous instincts, your desire to explore a world that until now was not available to you. The film may well be aimed at a younger audience who are much more open to the kind of wonder a film like this creates but that didn’t stop me from getting sucked into this world of intrigue, beauty and danger