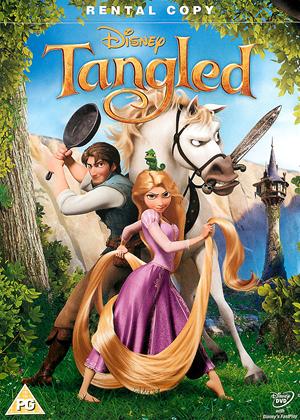 My four children love this movie, there is also lots of funny bits that the parents will enjoy, a great movie for all the family

Much better than expected... - Tangled review by Schrödinger's Cake

When Tangled first came out in the cinema, my daughter dragged me (almost screaming and kicking) to watch it with her. But as is often the way, it turned out to be so much better than expected.

It's a wonderfully silly adventure, laced with songs, humour and engaging characters. Your children will love it. And begrudgingly, so may you.

‘Tangled’ is Disney’s 50th animated feature and the last one about a Princess – which is kind of sad in all levels because this is the first Princess rendered in 3-D and also, the end of an era for animated female leads. At least they ended it with a bang, pop, and dazzle with Rapunzel.

The story of the girl with long golden hair locked up in a tower deep into the woods is quite fun, witty, sweet, heart-wrenching, and wonderfully played out. Although a prisoner of love and obedience to her Mother Gothel (Donna Murphy), Rapunzel (Mandy Moore) finds ways to amuse herself in her lonely homestead. With only Pascal the chameleon as company, her imagination and curiosity are richly cultivated, so it’s no wonder that she would welcome a road trip with pretty boy thief, Flynn Rider (Zachary Levi).

Flynn Rider is a wanted man for being an infamous thief and now, for stealing the lost princess’ prized tiara. He hides in Rapunzel’s tower and she makes a deal with him: Take her to where the Lanterns soar into the sky in exchange for the tiara. For a girl who’s known only her mother all her life, with no experience of the outside world and tricksters, she’s awfully good with extortion.

So off Rapunzel and Flynn Rider go and from there, they battle and outwit bounty hunters, the highly-efficient horse Maximus, and even Mother Gothel herself. The hilarity and action are brilliant, the visuals outstanding – thanks to animation supervisor Glen Keane (‘The Little Mermaid’) – the music heartwarming (music by Alan Menken and lyrics by Glen Slater), and the sentiments overwhelming. The Lantern Scene will have tears rolling down your cheeks; it’s such a breathtaking marvel in animation as well as overtly-dramatic and symbolic moment.

‘Tangled’ is lucky with its voice actors, animators, and musicians bringing to life this odd fairy tale and presenting it in the tradition of Rob Reiner’s ‘The Princess Bride’. As Disney Princesses go, Rapunzel is a fascinating character who embodies a girl growing up in want of adventures. All girls need adventures too, you know.