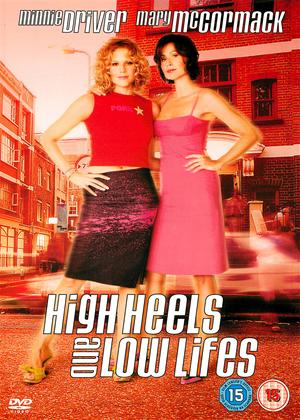 Rent other films like High Heels and Low Lifes

Comedy crime caper - made me laugh, but it's pretty lightweight stuff - High Heels and Low Lifes review by RP

I was looking for films with Minnie Driver and came across this offering from 2001. It's a comedy crime caper (do we still say 'caper' nowadays?) directed by the late lamented Mel Smith, who brings his own flair for comedy to the proceedings.

Minnie Driver (Brit) + Mary McCormack (for the US audience) are girls-about-town who overhear a bank robbery in progress. They track down the crims only to find they are nasty pieces of work who attempt to kill them. After a series of mildly amusing episodes including action sequences with gunfire and explosions, all ends well. Err, that's about it...

This looks as if it was made with one eye on the US market - there are lots of scene-setting tourist-type shots of London and Mary McCormack gets to practice an unconvincing mockney accent laced with a bit of 'underworld' slang. The tiresome Danny Dyer plays an appropriate role as an incompetent gang member, but there is a lot better from Kevin McNally as the hard man and Michael Gambon in a cameo role. The script is amusing (although there's a bit too much f-ing and blinding for my taste) and the best performances are from Minnie Driver and Kevin McNally.

It made me laugh a few times and I enjoyed it, but it's pretty lightweight stuff. 3/5 stars.

[Aside: The bank robbery element is based on the 1971 Baker Street robbery - look it up on Wikipedia. This robbery was also used in the 2008 Jason Statham film 'The Bank Job']