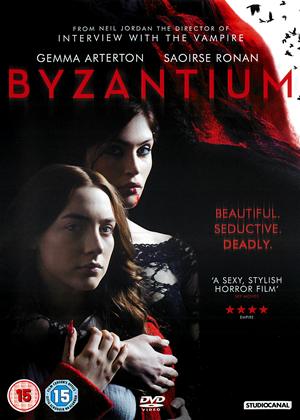 Byzantium is the name of the semi-deserted guesthouse apparently in Hastings (of all places) where two vampires Saoirse Ronan (daughter) and Gemma Arterton (mother) take up residence. Daughter is haunted by her past and longs to tell her tale. Err - that's it.

It's a long (just under 2 hours) film, beautifully photographed, atmospheric and well acted. But if you're looking for fangs, gore, garlic, crosses, coffins, superhuman feats or flying bats then give this one a miss - not only is it long, but it's short on thrills. It's a wordy, slow moving drama.

I found it pretty to look at but very average - 3/5 stars.

I wish they went into more of the history on the island. Apart from that it was ok, and it was good to see that they didn't particularly have any super powers. If the film was better I presume they were teeing up a sequel involving the brotherhood???

I'm not really into vampire films but this one was a bit different and I liked the "then and now' element , and the seaside setting and atmosphere. The two female leads were good and overall it was a good story, within the confines of the whole vampire genre. I liked the subtle references to John Polidori's "The Vampire' ( using the name of Ruthven - the first literary vampire ) and Lord Byron's "Darvell " character from his " A Fragment" unfinished story. I found the film atmospheric and well done, and would recommend it to people who are not "vampire movie' fans - and those that are but appreciate something a bit different.

From the mind of the director of Interview with the Vampire come Byzantium a completely different take on the vampire genre but one still filled with the same gothic imagery used in the 1994 cult classic. The difference between the two is that Byzantium thanks to is slow, sombre story is unfortunately quite boring.

Byzantium tells the story of Clara (Gemma Arterton) and Eleanor (Saoirse Ronan), a mother and daughter who are forced to live eternity moving from place to place trying to avoid the mysterious organisation chasing them. When they settle in a quiet coastal town Eleanor begins to make roots, something that causes tension between the two leading to a deadly climax.

Unlike most vampire stories, Byzantium isn’t concerned with the usual themes like the loss of innocence, Byzantium is a film about company most of all, the safety and security found through having a companion. For Clara she finds the company of men but feels most comfortable when she has someone to control. Eleanor on the other hand is completely different, seeking someone who understands the pain in living a solitary life, someone who understands her

The film despite its limitations has created two thoroughly relatable characters and they are played perfectly by Arterton and Ronan. In fact Clara is a joy to watch on screen, she is a character born for cinema, a sexpot with anger issues who lights up this dark tale. Unfortunately she plays second fiddle to Ronan’s Eleanor whose tale of desperation takes up most of the films story.

Filled with plenty of darkness and violence, including one piece of ridiculous popcorn violence near the end, Byzantium is definitely a tale of the macabre nature of vampires but in telling a very human tale it has lost the supernatural element that makes films like these so interesting leaving an overlong, depressing yet well acted mess instead