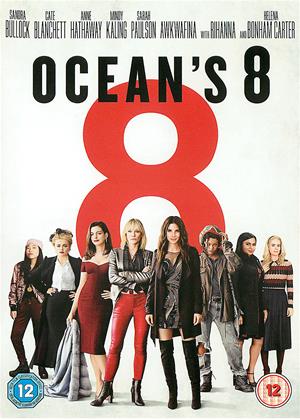 Was that Sandra? - Ocean's 8 review by NC

Spent most of the film trying to work out why Sandra B looks a bit like Michael Jackson. Is OK, is bright and colourful, and has a mass of dialogue, like the Clooney ones, but is a bit too light and fluffy to maintain interest...........

This is an enjoyable heist movie but the set up is definitely more entertaining than the final robbery. It doesn't quite have the zip of oceans eleven but better than the sequels.

This does just what it says on the tin. If you liked Oceans 11 then you'll like this. You kind of miss the guys though (Clooney, Pitt and Damon) but the ladies all fit in to the stereotype previously set quite well. Bit confused why Rihanna was in it but hey! Good fun! Nothing deep, nothing to think about.

What a disappointment - Ocean's 8 review by VN

I am a big Oceans fan and was really looking forward to this all female version. The casting was cheesy (Rianna, really?) and the story wasn't written nearly as well as previous Oceans. I think our entire group predicted the ending.

Slow start however good story line and all female cast adds a different approach to the previous films.. Great twists and conclusion with reference to Danny...

Its not bad. Not bad at all. Sure, doesn't quite have the charm, warmth and wit of the trilogy, but it was entertaining in its own right.

And it didn't suffer from Soderberg's nauseating colour filter craziness. Definitely worth a rental .

Over a year later and not only did I buy the thing - after renting it - but it's had more play time than any of the other Ocean's. Sometimes you can watch a film repeatedly just to enjoy the way it was put together. This is one such film for me. Nothing to do with endless attractive females. No sir.

Light weight but enjoyable and great casting. Rather formulaic, but to be expected. The all female set up is very refreshing

I love a Great Crime Caper Movie ,I loved the earlier Oceans Movies,I loved also the slick TV show Hustle, I equally love Women Criminals and have Always Enjoyed Women's Prison Shows like Prisoner,Cell Block H, Wentworth Prison, Widows and Orange is the New Black .so THIS movie is perfectly made for me .

The only bit I would wrinkle my nose at is the subtle sexism involved here .Unlike the earlier Oceans Movies hitting Underworld Run Casinos and Gangsters Bank Vaults etc... Its Women ,so they steal Pretty Jewelry from a Fashion Event .

But as far as you can see through that Obvious Misogynistic Female Trope it is a Fabulous piece of Entertainment .

I wil certainly be Buying a copy to watch again and again. along with my other Oceans Capers .

A pale all female version of Oceans 11 that falters badly! - Ocean's 8 review by CS

Nowadays it seems almost derigeur to take a great and successful storyline and give it an all female sexist feministic slant, and that's exactly what this film does! Right from the start, this film constantly makes referrals to Danny Ocean, as if it needs to continually remind us that she is his sister and that, don't worry, it's going to be great movie because it's a continuation of the franchise, when it isn't! This could have been such a good film, if it didn't constantly make referrals to Danny Ocean, continually slag off men and constantly push feminist agendas. There was no reason at all for this film to connect itself to the vastly superior and much more successful Oceans 11 films, if it had dropped the horrendous men bashing feminist agenda and just given us the storyline and stood up on it's own as a new film, then it could have been quite good, but it isn't! The script is done by the numbers and is literally a carbon copy of the previous films, nowhere near as slick, the acting is wooden and the casting is awful, some of the actresses really do look like they are sleepwalking through the entire movie, and it's quite ironic in a film that does so much men bashing and putdowns of the male species, to see Black and East Asian women badly attempting to be some bad ass chicks from a Fast and Furious movie! Rather ironically right at the end they do need two of the men from the original films t help out after all, which comes across as really hypocritical after all the male bashing that has been going on! I like Sandra Bullock as an actress and she has been in some great films but she looks really odd in this and Helena Bonham Carter simply does what she always does, stutters like a wooden doll throughout the movie!

I prefer this to men version - Ocean's 8 review by JD

Im much a syd, but i have to say i enjoyed this much more than the convoluted normal oceans films.

Most of the female actors were superb and there was no silly 'men are sub-beings and women are awesome' undertones. Well apart from Sandra's ex partner but that actually fitted into the story pretty well so was easily watched.

The plot is so so, but i found the characters really entertaining and i enjoyed watching it.

Not much new brought to the table , but this is an enjoyable Saturday night popcorn movie with the misses .Few twists and turns good cast we liked it.

Let’s set the table before digging into this film. Yes, I’m aware of the controversy many seem to be arguing that replacing an all-male cast film with an all-female reboot seems not as tantalizing. And I personally don’t care. Any idea can be done well and the examples of numerous remakes succeeding with cast changes most drastic are numerous. An all-female heist film can work, even with the tacked on marquee value of the Ocean’s franchise. That being said, it’s a very rusty film.

Ocean’s 8 seems to be trying to take itself most seriously with its tale of struggling women aiming to make a mint that it surgically removes the campier and giddier moments. Consider how casual Sandra Bullock seems as Debbie Ocean, the younger sister of Danny Ocean. She is released from prison and puts on a face far to cool for a woman who wants to get back in the game with little drive than the thrill of the heist. She goes about assembling her +1 Seven Samurai brigade to make it happen.

An easy convincer is her previous crime partner, Lou (Cate Blanchett), who is now a nightclub owner. Other players have more of a goal and a stake. Rose Weil (Helena Bonham Carter) is a fashion designer that is running out of cash. Amita (Mindy Kaling) is a jewelry expert that feels undervalued at her job, in addition to being insulted about not finding the right man by her mother of an employer. Leslie (Rihanna) is a hacker who could use some extra cash. Constance (Awkwafina) is a classic street hustler so she’s always up for the next big score. And Tammy (Sarah Paulson) just wants to get out of the less-refined shady dealings of selling stolen goods out of her home, given her crowded garage.

They all band together to rip off a multi-million dollar Cartier necklace to be worn by stuck-up movie star Daphne Kluger (Anne Hathaway). They plan to do so during a special gala which means all the women will have to wear many hats in the operation, figurative and literal. And their scheme is quite clever, utilizing everything from bad food to diaper-changing stations to classic misdirection. And, naturally, not everything will go exactly according to plan and the heist becomes more complicated with making quick calls on the fly.

So why does it all feel so clinical? All the actors feel so understated, even for playing roles that sound so much fun on paper. I loved how Awkwafina was able to own Crazy Rich Asians with her supporting roles but it feels like she was put on tranquilizers for playing a slick-talking trickster. Mindy Kaling would seem to have a role that allows her to bite back the biggest but merely nibbles when getting her revenge through robbery. And Anne Hathaway had plenty of room to chomp as a snooty celebrity that I’m surprised she didn’t take as much charge as her character does in the third act.

Perhaps the actors are worried we won’t take them as seriously, trying to present more business-oriented robbers. In a more sophisticated film, perhaps, but a style as distinct as Ocean’s shouldn’t feel so stiff and by-the-numbers. With direction that seems sleek, sexy, clever, and giddy, the enthusiasm feels surprisingly dry for what could’ve been an engaging all-female heist picture.