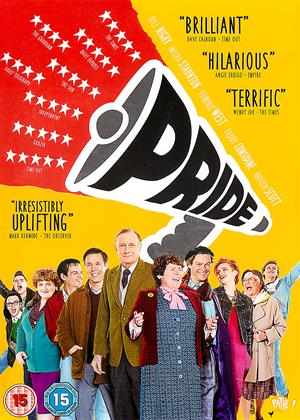 Funny, dramatic, moving and brings up so many important issues that are still relevant today. Great talent in from all the actors. It is one of the few films after renting that I would consider buying!

Uplifting and also are minder of why politics and doing something even as an individual, small group or community can make such a difference to the world.

I feel it gave me insight into the frustrated aspirations of two communities which faced superficially different, but in many ways similar problems.

I would recommend this film to anyone; it works as both a piece of entertainment and also a dramatisation of a slice of British history as important, in its own way, as 1066. Also, it has Bill Nighy in it. And Dominic West!

Set during the miner's strike of 1984/85, the film is a comedy drama that tells the somewhat bizarre tale of a small group of gay activists who raise money for a small mining community in South Wales.

It has a shed load of top-notch Brit actors (including Imelda Staunton, Bill Nighy, Paddy Considine, Dominic West (still trying to escape the typecasting of 'The Wire')) and while it has a few amusing moments, I found it deeply unfunny.

Why? Because it's too politically correct. It tries to superimpose a current day view of gay and lesbian rights onto the world of 30 years before - and for me, it just doesn't work. Part of it is the language - the thought that in a mining village in the 1980s gay men would be referred to as 'gay' is, frankly, just silly. It would be 'queer' (a word that has now been reclaimed with some pride) or worse. It's small things like this that make the whole film simply not ring true to me - the whole thing is unrealistic and the few homophobic characters depicted are clichéd.

It has won awards and praise, but while the film did bring the occasional smile to my face I found it overburdened by political correctness. Only 2/5 stars.

I really enjoyed this film, about gay and lesbion activists supporting the striking miners, which supports each others cause. Based on a true story and events . Very well acted .