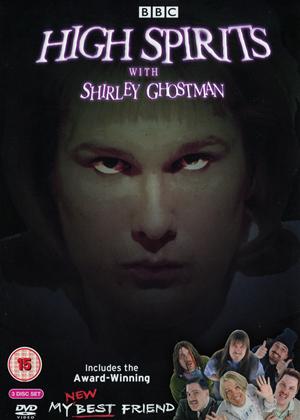 Rent other films like High Spirits with Shirley Ghostman

Sign up
Mike Leigh at the BBC: Nuts in May / The Kiss of Death

I didn't make it to the end of Disc 1, because this series is literally unwatchable. The premise is good: a comedian pretends to be a laughably inept spirit medium and attempts to convince unsuspecting members of the public he's for real. Unfortunately the execution is horribly crass. The fictional "Shirley Ghostman" is a supposedly straight man who is screamingly camp in a very irritating way, presumably as a clumsy parody of certain famous TV "psychics" who are obviously gay but won't admit it. The scenes which link together the rest of the show - Shirley Ghostman performing for a live audience who supposedly think he's for real - don't work either, since the dialogue makes it clear that by the time the second show was recorded, the first one had already been broadcast, so everybody knew it was a joke. Even in that first show, at the end of which a couple of halfwits are persuaded to say on camera how impressed they were with SG's psychic powers, it's apparent well before the end that 90% of the audience are either openly laughing, or having trouble getting their heads around how dreadful this supposedly real medium is.

That first show includes such humorous highlights as our hero revealing to a member of the public who thinks he's for real that he gained his psychic powers by wrapping the family dog's head in clingfilm and shoving toys up its anus while it suffocated, and a lady who reads peoples' fortunes by examining their bottoms (who apparently is for real) being interviewed by an actor pretending to be a ghost-hunter who is at least borderline retarded, and makes all the most screamingly obvious jokes you can think of (and probably did while reading the previous couple of lines), as well as even worse ones about being sexually abused as a child. And so on. Almost all the jokes involve bodily functions or weird sexual habits, but if you're not funny in the first place, crude shock-tactics won't solve the problem.

Another aspect of the show, the ongoing "psychic academy" feature, seeks out the most gullible people on earth and persuades them to participate in what they think is a training program with a real psychic. This is almost funny, because there are sour, cynical, mean-spirited laughs to be had watching these dupes reveal themselves to be so stupid they have trouble counting up to ten, and so ignorant they don't know what a teapot is. But it's not really a very enjoyable kind of fun.

If a true master of character-based comedy like Steve Coogan had attempted something like this, the results could have been hilarious - can you imagine Alan Partridge interviewing a lady who reads peoples' bottoms? Though I doubt it would be possible for somebody as well-known as Steve Coogan to pull it off without being recognized, so it's understandable that they went with the much more obscure (and no doubt much, much cheaper) Marc Wootton. But maybe they should have asked themselves why he wasn't especially famous before giving him the job, because judging by this sorry mess, there's a very good reason. As for Sir Patrick Stewart, I can't imagine why he agreed to narrate. Presumably, like Stephen Fry, if he's in a good mood he'll agree be in absolutely anything. And since he doesn't really contribute anything other than a famous name to put in the credits, presumably the BBC knew all along that it was mediocre enough to need that kind of help.