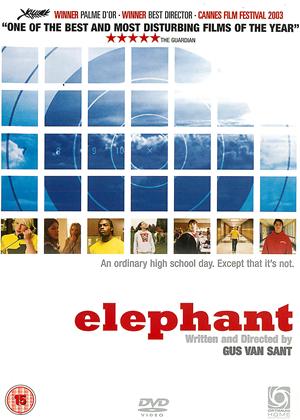 Loosely based on the 1999 Columbine high school massacre, 'Elephant' presents the viewer with the uncomfortable feeling of having to watch events take place in real time. But the whole point of 'Elephant' is to show just how mundane everyday life is, and a how a seemingly routine school day for these kids turned into something truly horrific, and for this reason it makes it so much more effective when the shootings finally take place. This is an American high school in all it's meaningless triviality suddenly becoming frighteningly, sickeningly real and inescapable. Director Gus Van Sant doesn't pass judgement on the killers; he's smart enough to know that there is no single explanation for their behaviour, which arises from a variety of sources. Elephant is also a film which doesn't leave the viewer with any form of closure, it's tragic, it's not supposed to have a happy ending, but then neither did Columbine.

What a lot of rubbish. Cameras follow the characters behind them in slow boring takes, a complete waste of time.

This was the worst film I have ever seen. The documentary style of the film makes it seem very realistic but also very boring as it trawls through the day at the school

"ELEPHANT" covers the hours before and during a mass shooting at an American high school. Watching it, is like waiting for a time bomb explode. However, it is important to note that this isn't an action film so there are no heroic star-actors to come to the students help, and not being a horror film either there are no drawn out scenes of survival in extreme situations for your entertainment. What you see is played much like a fly on the wall re-enactment, but you may like myself still see many familiar film elements that take it a away from being too dreary and documentary like.

The film begins as what is probably an average high school day, and for a while even has some hint of the excellent 1970s set nostalgic lighthearted movie "Dazed and Confused". The long tours around the school that follow may be too slow paced for some but it gives you a chance to see how large the school is and the students that attend it, and determine which decade the film is set in which I did find a little difficult to place to begin with. The restricted-vision camera style used reminded me of the World War 2 concentration camp movie "Son of Saul". You are also given time to explore the lives of several specific students of the school. When the film progresses to reveal the student gunmen, the tone does shift to one of impending doom. It's a tone shift quite like that of the Michael Haneke film "Funny Games" which with a dark humour features two "bad" male teens who are terrorising an innocent family seemingly for the fun of it. "Funny Games" although ficticious is actually quite an intelligent look into watching violent films for entertainment and you can save that family from harm by optionally choosing to stop watching when things get too bad for them. However with ELEPHANT because it is almost a true life re-enactment of a school shooting, although you may want to stop watching the film at the point you undoubtedly know people will start to die (you will know when) that is almost like not facing this real life situation. As the tragic deaths unfold you are left at the abrupt ending feeling like you wanted to know a little more about the lives of the students you've seen and hoping that steps could be taken to stop these events happening again.

What was the actual cause of this tragic event is not fully pinpointed in the film. There did seem that there were just as many potential contributing factors in the characters lives that were not revealed in the film as those that were actually included. At least if a few people who watch this film ponder or discuss what happened and why, it I think that is a good enough reason for the film to be watched.