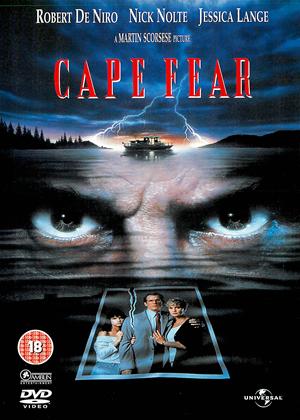 Too over-the-top for me - Cape Fear review by RP

A convict (Robert De Niro) is released after serving 14 years in prison. He returns to a small North Carolina town and stalks local attorney (Nick Nolte) and family, seeking revenge for the attorney's failure to properly defend him. Attorney is weak and attempts to defend himself + family both within the law (a failure) and outside the law (you guessed it: a failure). The film builds to a finale on board the family's houseboat on the Cape Fear River.

Directed by Martin Scorsese, the performances are excellent and the film is highly regarded. Unfortunately the film is by no means subtle - De Niro's character is just too over the top, has too many tattoos, his Southern accent too heavy, his resistance to Nick Nolte's attempts to defend his family too obvious, his very resistance to pain predictable, his every move telegraphed well in advance. Within minutes of the film starting we can guess what will happen and how it's going to end and the 'climax', while well done, is just sooooo predictable.

This 1991 film is a remake of the 1961 version which starred Gregory Peck and Robert Mitchum. I think I'll order that to remind myself how good it was - in the meantime I'll mark this one down for being so over-the-top and give it 3/5 stars.