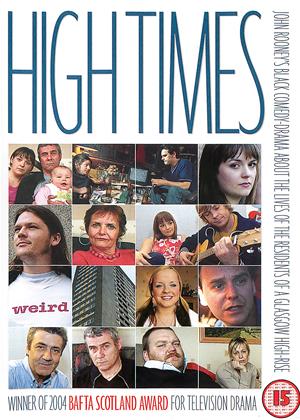 Synopsis:
"High Times" is a streetwise and affectionate look at the ups and downs of the characters who live in a high-rise in a fictional Glasgow scheme. Winner of the 2004 BAFTA Scotland Award for Television Drama, the six part series introduces us to the residents of the Fairmyle housing scheme.

Rab
Streetwise, 18 year old self-unemplyed, who lives on the topmost floor - the penthouse. Rab is a deep thinker, whose philosophising has a tenuous logic to it. Unemployed since leaving school, he has become such a fixture at his local DSS office, he was once invited to their Christmas party.
Jake
Rab's flatmate, naive, but in an endearing way. Jake is also unemployed, but so thick that no employer will have him. And the DSS have given up on him altogether.
Jimmy
Shy and introverted musician. Has his eye on (laire O'Neill, but the arrival of his embarrassing uncle Tex is (ramping his style!
The O'Neills
Menopausal Alice, kind-hearted but intimidating, and with one look can strike fear into the hearts of those on the receiving end. Husband Eddie, former joiner turned professional house-breaker. Daughter (laire, attractive 14 year old single mother, and a centre of attention for both Rab and jimmy.
The Farrels
Frank, 38 year old security guard and couch potato, whose lifestyle embraces every excess in the book. Wife Janet, who has managed to retain her youthful appearance, despite being married to Frank for 15 years. Daughter Tracy, rebellious teenager, who thinks of little other than boys and mobile phones.
Tex
Postman by day, take-away delivery man by night. Country & Western fan who can often be seen on his rounds sporting a stetson and cowboy boots. A serial womaniser, thrown out by his third wife, Tex is now an unwelcome lodger in Jimmy's flat.

Sign up
Once Upon a Time in the Midlands

Sign up
The Boys and Girl from County Clare